Grete Oppenheim was born on 25 May 1922 in Niederaula, a village 70 kilometres south of Kassel. She grew up in a family with three children. Grete had an older sister Ruth (1921) and a younger brother Manfred (1926).

Grete fled to the Netherlands at age 17 and reported to the Werkdorp in mid-September 1939. She started to work in the household. At the Werkdorp Grete met Hubert Wolfgang Rüssmann, who had arrived there a year earlier. After the Werkdorp was evacuated on 20 March 1941, Hubert first found accommodation on Leonardostraat and at the end of December on Milletstraat. Grete initially lived on Van Eeghenstraat. From 19 October 1941, Hubert works as one of the five employees at the Expositur at Jan van Eyckstraat 15 in Amsterdam. He has a ‘sperr’ because of this position. Expositur was the contact between the Jewish Council and the German authorities.

Her elder sister Ruth (1921) was deported from Kassel/Halle to Sobibor together with her parents on 1 June 1942. They were murdered there on 3 June 1942. Her brother Manfred Oppenheim (1926) survived the war and settled in Israel.

Hubert and Grete married on 10 July 1942 and Grete moved in with Hubert on Milletstraat on 15 July 1942. Hubert died on 29 May 1943. About a month later Grete was arrested and taken to Westerbork. In Westerbork she asked to be informed from Amsterdam if she was put on the Palestine list. On 24 June 1943 she was told that she could not be put on the Palestine list. And despite the ‘sperr’ she received on the basis of her husband’s position, she was transported to Sobibor on 6 July, where she was killed immediately upon arrival on 9 July 1943. 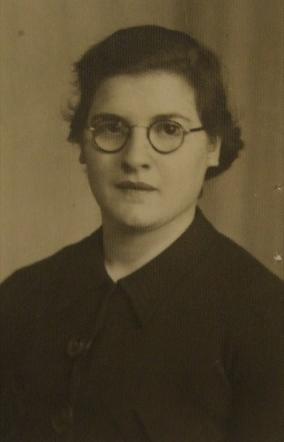