A place to live

A self-built home
Most of the residents will learn about agriculture in the Werkdorp, but other knowledge and skills will be needed in the beginning.

The intention is for the 250 pupils to receive education there as well as live and recreate. This requires 16 wooden barracks and a large stone building, the community centre. The first pile was driven in October 1934 by James Mc Donald, high commissioner of the Committee of German Refugees of the League of Nations.

The furnishing of the residential barracks is rather primitive at first. No water pipes, no electricity, a tub to wash in. They are allowed to take a shower once a week at the school in Wieringerwaard, two kilometres away.

Soon after the opening, an apprenticeship programme (bricklayer, carpenter, plumber, electrician, metal worker) solved this problem. Not all buildings are connected to the water supply, only the community house, the Haukeshuis and a central bathing facility. There will also be a separate toilet building. There is a ditch on the site that contains methane gas, which spontaneously rises to the surface because of the peaty subsoil. This gas is collected in an installation and led through a pipe system to the buildings for heating purposes.

Across the road, the Wieringermeer management has built a farm. A redundant wooden house of the Department of Public Works was brought from Wieringen and called the Haukeshuis to serve as management residence and office.
The construction itself also serves as a training ground in the subjects carpentry, bricklaying, electrical engineering and metal working.
At the end of 1936, the Werkdorp was completed and the bricklaying lessons were cancelled. 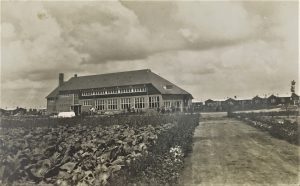 Applications
The Foundation for Jewish Labour and the Committee for Jewish Refugees cooperate in admitting students. The German Gertrude van Tijn, married to a Dutchman, is employed by the Committee to determine who is and who is not welcome at the Workplace. She deals with all administrative mutations.

The apprentices are young men and women of various plumage. The target group is formed by the German refugees aged 18 – 25. They are generally Jews who have lived in Germany for generations and whose marital status was changed to stateless by the Nazi regime.
In the initial period, many young people with communist sympathies took refuge in order to avoid arrest. Emigration to Palestine is not a preference. They want to return to Germany as soon as they can. Things do not go well between them and the other residents.
The Zionists want to prepare for their future in Palestine and others have purely escaped the danger that threatens them in Germany.  All of them are young people who have no future in Germany. They have been expelled from high school or university or have parents who are financially strapped. Life in Germany is becoming more unbearable by the day; it is no longer safe to be on the streets.

When Germany annexes Austria in March 1938, young Austrian refugees arrive in the Werkdorp.

The stream of refugees increased dramatically after Kristallnacht in November 1938. Among them were many students of German hakhsharah schools who reported to the Werkdorp. The influx is so great that expansion to 300 accommodation places is necessary.

Many of these young people are not yet adults and enter the Netherlands via child transport. The government opens the already closed borders once more to admit 2000 children. There is no place for their parents. The age limit for a place in the Werkdorp is lowered from 18 to 14.
Some of them were arrested during Kristallnacht and locked up in a concentration camp for several months. There they are told that they can be released if they leave Germany within 24 hours. They have lost their youthful innocence forever.