The creation of the monument of names at the Jewish Werkdorp in Slootdorp. 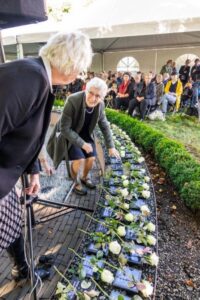 When the government decided in 2019 to pay extra attention to the Holocaust, the idea arose that, should the municipality of Hollands Kroon wish to participate in this, the Jewish Work Village would be the place to be.
In addition, there is not a single Stolper or memorial stone in the entire municipality; all the more reason to change this.
At present, the Werkdorp still lives in the collective memory of the Wieringermeer residents, but that will diminish with time.
Marieke Roos wanted to prevent what happened here from being completely forgotten. And that the names of the last inhabitants of the Werkdorp will still be mentioned. What makes it complete is that here on this website these names get a face. And if possible a story. Immediately Ina Hoogenbosch was willing to participate and from that moment there was talk of a duo. 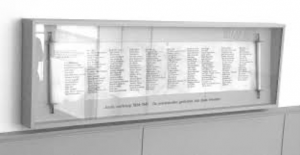 A list of names of those who lived there during the evacuation of the work village on March 20, 1941, and ultimately did not return, hangs in the hall of the still-existing community center.
The list was unveiled at the first reunion of survivors on 31-12- 1981 by Mrs. Lea Katznelson, widow of the first director.
There are 186 names on it, supplemented here and there by…’and wife’ or ‘and children’.
Altogether, it amounts to 197 pebbles. Other Werkdorpers have also died, also former pupils, but to trace them all would have been too far. Moreover, the list in the hall and the stones outside have a logical connection. 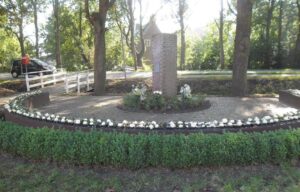 The design was based first and foremost on the existing column. This monument, which tells the history of the working village, was erected at the initiative of the municipality of Wieringermeer, especially of Mayor Knorr in cooperation with a committee of survivors. Former residents Gert Laske and Paul Schwarzschild unveiled this plaque on November 9, 1989. The idea of a semicircle was beautifully shaped by Mr. A.C.M. Hoogenbosch. First of all, it has something protective about it, but more than that: it is a reference to the residential barracks that stood in a semicircle behind the community center. 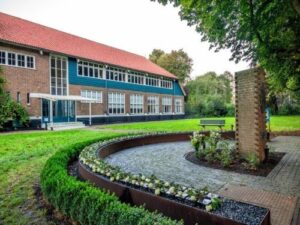 An initial estimate of the costs showed that it would be an almost unfeasible task. If it was to succeed, it would need money as well as manpower and materials. A small year was set aside for the realization of the project.
First of all, the municipality and the owner of the land were approached. Both agreed to cooperate. Of the municipality, the Kernbeheer department and the Hollands Kroonse Uitdaging should be mentioned. They were ready with advice and assistance. The publicity campaign yielded a flow of large and small donations, as well as pledges of material and manpower. We consider ourselves fortunate that in this municipality personal involvement has led to this result.