The eviction
The German invasion on 10 May 1940 initially caused panic among the Werkdorp residents. All the misery from their ‘German’ days surfaced. The feeling of having found a safe haven in the Netherlands disappeared at once. For the time being, however, not much changes for them, so that after a few days relative peace returns. But within a year, and no one in the Werkdorp knows of these plans, the Werkdorp’s days are numbered. 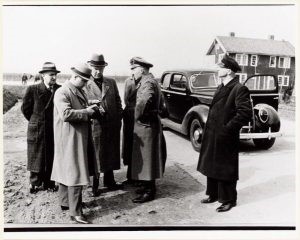 On 20 March 1941, around noon six busses of the Amsterdam transport company arrive, accompanied by the cars of Klaus Barbie and Willy Lages of the Sicherheitsdienst.
The bell is rung outside and everyone knows what that means: dinner time. Now, after the meal, everyone has 10 minutes to gather his/her things and get on the bus. Then work leader Kemmeren stands up. He points out that the business must go on. Soon there will have to be a harvest and this is very important in connection with the food supply. Barbie and Lages are sensitive to this and give Kemmeren and his colleague Slabbekoorn of the horticultural department permission to appoint 50 men and 10 women to stay until after the harvest. The worst thing I ever had to do in my life,’ says Kemmeren. 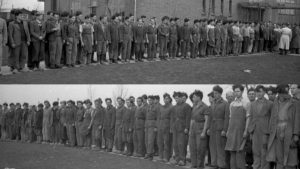 The six buses leave the polder. Gert Blauboer lives a little further down the road; he is a friend of some of the workers and wrote in his memoirs: ‘Spring 1941, they were taken away; I was standing by my shed when the buses drove past. A raised hand from the bus was the farewell. For them it was the way to the gas chamber and for me it was decisive for where I wanted to stand’. Gert joined the resistance which had a great impact on the rest of his life.

On arrival in Amsterdam, the students were initially housed in Asscher’s diamond-cutting factory in the Amsterdamse Pijp area. Most of them found shelter with relatives or host families. Of this group, an address list was made, which the occupying forces abused in an underhand way a short time later.
In November 1941 the younger Werkdorpers were housed in a house on Plantage Franschelaan, now Henri Polaklaan, and a house on Nicolaas Witsenkade became the shelter for the older Werkdorpers. There is also a meeting room here.
In the beginning, the horticultural training succeeds on a piece of land near the village of Sloten, west of Amsterdam. Later, the horticultural group is banished to Zeeburg, behind the old Jewish cemetery in the eastern part of Amsterdam. Still later, there is nothing left to do but to disband everything.

In June 1941, the Werkdorpers in Amsterdam and the Jewish Council become acquainted with the atrocious plans of the occupying forces and their deception. On the basis of the promise that the Werkdorpers could return to Slootdorp, the Jewish Council handed over the address list of the Werkdorpers to the occupier. They would be picked up from their homes.
But instead of going back to the Werkdorp, they are taken to camp Schoorl. The Germans need 300 strong young healthy Jews between 18 and 35 for Mauthausen. Three months after the eviction, 57 young men from the Werkdorp died. After a few weeks, the first death reports came in; six months later, all 57 were murdered.

The other Werkdorp residents experience an uncertain and unsettled time in Amsterdam. They look for a job in order to have something to do and earn some money. Others return to their studies. A few of them got a job with the Jewish Council immediately after their arrival in Amsterdam. Their numbers increased sharply when Adolf Eichmann ordered the deportation of 1,000 Jews a day at the end of June 1942, starting in mid-July to reach a total of 40,000 Jews from the Netherlands. Mid-July 1942 the first train leaves Westerbork for Auschwitz with a group of Werkdorpers of whom not one survived the war.

In mid-1942, there were death notices not only from Mauthausen, but also from Germany, where family members were forcibly deported to East Poland or Belarus, and of whom not a single message was heard after that. Every Jewish family waits in fear and uncertainty whether the time has come for them too. Some kept hoping that the deportation to the east would pass by their door, others did everything in their power to have the deportation postponed, others went into hiding or fled, and there were also those who joined the resistance.

The stayers
The Werkdorp closed permantly on 1 August 1941. The “stayers” are on average the slightly older pupils and they soon look for a place to stay after the harvest. They mostly leave individually or in small groups. Alfred Cohn later says that he and others received help. He ended up in Ursem and later in Lutjewinkel. In April 1942 he moved to Deventer. Some stayed in Wieringermeer, among others on Sicco Mansholt’s farm. At first legally, and later as people in hiding. At the end of the parcel path on the side of the ditch, a large hole has been dug for emergencies.
Most of them have been in the Netherlands for quite some time and are known to the Deventer Association. The latter ensures that the Werkdorpers can go to farmers in Twente and the Achterhoek on an individual basis.

Gertrude van Tijn advised the three ‘Werkdorp families’ to go to Westerbork voluntarily because: ‘it is a paradise for children there’. They did not follow this advice. 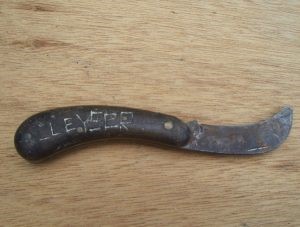 The couple Lothar and Gitta Leyser first went to her mother in Amsterdam, then they went into hiding in Naarden and then they were forced to return to Amsterdam where they did not escape the razzias. They were gassed in Sobibor on 9 July 1943 together with their two very young children. Menni and Rosa de Vries were taken from their home in Zwolle and deported to Auschwitz. Rosa and the two children were gassed on 3 September 1943 and Menni perished in the same camp on 31 March 1944. Only the Heinz and Ruth Durlacher family and their son Uri survived. After a turbulent period, including working in the resistance, they made a flight across the Pyrenees to Palestine.

Resistance
Several Werkdorpers sought the resistance. Joachim Simon (Shushu), together with Joop Westerweel, Menachim Pinkhof and Mirjan Waterman, set up the Westerweel Group, a resistance group in which Jews and Christians worked together in their resistance against the occupier. Joachim is a Werkdorper who, after his training, is asked to join the leadership of Paviljoen Loosdrechtse Rade. Smaller in size but similar to the Werkdorp and aimed at minors from the children’s transports.
The Westerweel group looked for and found a way to save the pupils of Loosdrecht from deportation in August 1942. The day before the occupying forces came to get the youngsters, the last one had left. This is the first major action of this resistance network.

Even before the transports started, in the summer of 1942, in the house of Heinz and Ruth Durlacher the basis was laid for working out the plans to house the hakhsharah members at hiding addresses and to look for escape routes to Switzerland, Italy and Spain. In addition to Heinz and Ruth, the other members present were Joachim Simon, Kurt Hannemann, Adina van Coevorden and Kurt Reilinger.
In October 1942, Uri, the son of Heinz and Ruth, was brought to The Hague. In April 1944 Werkdorper and fellow resistance fighter Kurt Reilinger proposed to take three-year-old Uri to Spain. The parents agreed. The toddler was first placed in a children’s home in Toulouse. Then he went with a group of children to Spain. During the hike across the Pyrenees, the older children took turns carrying Uri. Then, in the autumn, Heinz and Ruth also arrived safely in Spain. They had already bivouacked in France through the resistance. Kurt Reilinger survived the war, but was run over by a truck near Harderwijk in the summer after the liberation.

Gert and Henny Sperber-Chlebowski also joined the Westerweel group. Both of them managed to find a place to stay in the Schermer region after the eviction. Via Deventer and Almelo they moved to Amsterdam in the autumn of 1942. During her work in the kindergarten opposite the Hollandse Schouwburg she met Zilly Grünberg, a daughter of acquaintances from Essen. Zilly (12 years old) was rounded up during a raid. A German saw that she was alone, let her go and she was taken in by Henny. From there Zilly went into hiding in Renkum. Zilly survives the war. Gert and later on Henny also went into hiding in Renkum. Henny gives birth to a daughter Edith Irene in the summmer of 1943.
Staying together apppears to be impossible for the family. Early 1944 Gert and Henny both go to Paris where they join the resistance. They were rounded up and neither survived.
Irene lays in 2021 the two memorial stones of her parents at the monument near the Werkdorp