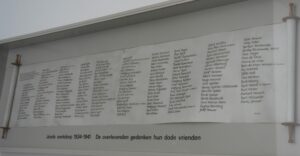 In the main building of the Jewish Werkdorp Nieuwesluis hangs a scroll. This scroll was made by Bart Boumans. The scroll was donated by the reunionists of the work village on 13-05-1981, 40 years after the eviction in March 1941. The money required for the scroll and the display case was collected by a large number of former workers, on the initiative of the organising committee “Old-Werkdorp People” with Mr Julius Werner Reutlinger as its chairman. It was unveiled by the widow of the first director, Mrs. Lea Katznelson. Mayor Johan Knorr of Wieringermeer laid a wreath together with his wife. At the unveiling it was agreed that the scroll would hang for 10 years, eventually it hung there until 2004. Then it went into the cellar of the municipality and returned to the main building in 2011.

The roll of names

The roll of names represents 197 werkdorpers who were murdered in the 2nd World War. And has the intention to commemorate our dead friends, according to the compilers. Former Werkdorp residents Julius Reutlinger and Gert Laske and four other Werkdorp residents, together with mayor Johan Knorr, took the lead in this when they brought the group of survivors together for a “reunion” in 1981.  We know now, in the year 2021, that not all persons mentioned on the roll lived and/or worked in the work village, but undoubtedly the compilers felt that these persons deserved a place. What is certain is that all persons mentioned are directly or indirectly connected with the Werkdorp. And that decades later, this monumental roll of names keeps the history of this 197 and the Werkdorp alive.

The main building has changed hands three times. The artists Van Beieren and Ravenstein bought the building in 1989 with the roll of names and inventory. The purchase contract contained a clause that obliged them to keep the showcase with the roll of names, the stone monument, the inventory and the garden intact. In 2004 they wanted to sell the building. To secure the scroll, they donated it to the municipality of Wieringermeer. The scroll would then go to the new owner of the building and be hung back in its original place. The furniture was placed in a museum in Enschede.

The intention was to give the roll of names a temporary place in the central hall of the town hall in Wieringerwerf. Freely accessible to visitors. The municipality accepted the gift, but at the time could not find a good place for the large display case of almost two and a half metres.

Restauration of the roll of names

The scroll had faded over the years and the names were no longer clearly legible.
The municipality of Wieringermeer therefore decided to have the scroll restored before it was returned to its original place after the property was sold.

The scroll that now hangs in the hall of the main building is the restored one. This can be seen from the inscription to the right just below the wooden stick (see arrow). The Hebrew abbreviation means: “May their souls be bound in the bundle of eternal life”.

The source for this wish comes from I Samuel 25:29 where Abigail speaks to David and says: ‘If any man should rise up to persecute you and kill you, my lord’s soul will be bound up in the bundle of the living with the Eternal your God – … wehajeta nefesj adonie tseroera bitsror hachajiem …’

The display case was also in need of repair. The size had proved to be a problem. It proved difficult to find a suitable place in temporary housing for such a large display case measuring 230×60 cm. Because it was not certain when the scroll could be returned to its original place, the municipality of Wieringermeer decided to have a smaller, flat and manageable display case made measuring 209×15 cm.

A plate from the Werkdorp 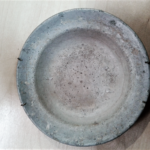 In March 1991, the Holocaust Museum Yad Vashem organised an exhibition on Werkdorpers in Europe. Werkdorp Wieringermeer was also to receive attention. Consultation between then mayor Johan Knorr and survivors of the Werkdorp led to a donation of several objects from the former Werkdorp to Yad Vashem. Mr Dick Appel and Mr Siem Hanse were commissioned by the mayor to make a copy of the roll of names.

This was sent to Israel together with crockery and exhibited there together with photographs and original documents of survivors who were members of the Zionist underground pioneers in the Netherlands and their descendants. In 2015, these items were included in the archives of Yad Vashem museum.

Monument, roll of names and furniture

The original roll of names was not hung back in its current, original place in the hall of the main building until 2011. Mr Willem van Schaik was renting the building at the time and wanted to turn it into an art museum and a Werkdorpmuseum. He approached the municipality and returned it, as stipulated in the deed of sale. However, his museum plans did not go ahead.

According to the deed of sale, it is not only the scroll that is the property of the owner of the building. The furniture and the Torah scroll are also belong to the property.

On the terrain there is also a small stone monument, the pillar, which was unveiled in 1989 by the former residents Gert Laske and Paul Schwarzschild. The monument was regularly visited by other former residents and their relatives.