Daily Life
Quite a lot is known about daily life in the Werkdorp, for example from Gertrude van Tijn’s correspondence with the Committee for Jewish Refugees and the Foundation for Jewish Labour. There are also portraits of survivors, written down by L. Peeters in her thesis “The Jewish Work Village in Wieringermeer: 1934 – 1941”. Chapter 7 of the standard work on the Werkdorp by H.B.J. Stegeman and J.P. Vorsteveld contains a telling and comprehensive description of daily life. This book, “The Jewish Work Village in Wieringermeer 1934-1981” also contains recollections of former Werkdorp residents who attended the 1981 reunion.

Former Werkdorpers remember the welcome they received in the Werkdorp after having come to the Netherlands on one of the children’s transports in 1938 or 1939:

Ilse Heymann puts it this way: ‘Of course we were completely confused. There you were as a young child, just sixteen, without parents or family. Whatever they did to take care of us, it could not be enough‘.
Alfred Cohn says: ‘It was pleasant. It was not always fear and misery. We were worried, especially about my mother, but you get used to worrying‘.
Hans Heinz Laufer thinks the most important thing about the Working Village was the liberation he felt: ‘I was suddenly a different person. Everyone there was Jewish and you were respected. You cannot imagine that if you have not been oppressed as a minority yourself.

These last remarks make it clear at once that life for a Jew in Germany soon after Hitler came to power was no longer – to use a Yiddish word – ‘jofel’ (= pleasant). A life you don’t want to live.

Loneliness, homesickness, after a while no contact with family because they had been rounded up and taken to Poland or Belarus. But you do have contact with relatives who are already in England or the US and the (justified) fear of not being able to travel after them yourself, even if you had a ticket for the boat or a visa in your pocket. And then there are younger brothers or sisters waiting in host families. Waiting, yes, but for what? All these feelings will have coloured their days.

Daily routine
Everyday life has a strict daily rhythm. The young Werkdorper Hajo Meijer, born in Bielefeld in 1924 and who died in Heiloo in 2014, describes it in detail in a letter to his parents.

Getting up at 6.30am. Breakfast half an hour later. That is not bad in his time. There is porridge, bread, coffee, tea. In the beginning, poor man is kitchen master. There is a shortage of everything. The intention is for the Working Village to become self-sufficient, but in the first year there is little to harvest. There are complaints that only two slices of bread per person are distributed with a little jam and no more. And a constant lack of money prevents us from making generous purchases in every area.

After breakfast, everyone goes to work. The women stay behind. They are trained in household chores and growing fruit and vegetables.  Their work is in and around the main building. Not everyone is happy about this. Real Palestinians know that there is no distinction in the kibbutz. Everyone can be put to work there. Some want to learn how to milk, but that is only allowed in exceptional cases. 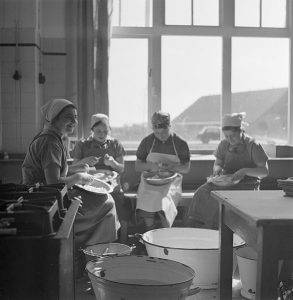 The point is, of course, that these girls had other ideals before their arrival than to become housekeepers, especially those who had to interrupt their university studies or jobs. But there is no other choice. And the expectation is that everything will be different again after emigration.

At noon the bell rings for lunch. Hot food is also rather monotonous in the beginning. Lots of beans, potatoes and little fruit and vegetables. Food has to be bought and money is an ongoing problem. Once the farm and the fruit and vegetable garden start producing crops, everything becomes much better. There is even surplus.
Because of competition considerations, this cannot be sold to the regular trade. So it ‘disappears’ to Jewish merchants in Amsterdam.

After lunch, work continues until about three o’clock and then the theory lessons begin. For the cattle breeding students there is a shift system. They work from four o’clock in the morning until twelve o’clock and from twelve until eight o’clock in the evening.

After the evening bread roll, one is free. That is, there are still classes, but on a voluntary basis. The Palestine travellers can take lessons in “Palestine studies” so that the new homeland will feel a little more familiar. The language of instruction is German. There are also lessons in foreign languages. Spanish for those who want to go to South America, English for the rest of the world. Everyone is taught in Ivrit.
Dutch lessons are not given. The government policy is to have these refugees emigrate as soon as possible after their education. Contacts with Dutch people are not encouraged, so why should they learn Dutch?

There will also be entertainment. There will be guest performances by Jewish actors, musicians and others from Amsterdam. There is also walking, skating and swimming. The neighbourhood had different opinions about recreation at the edge of the canal. Neighbour Saal, a sympathiser of the Germans and a farmer, writes: “I thought the Jews who lived in the camp for Jews in the Wieringermeer were scum because I knew that on Sundays they, both men and women, took an indecent sunbath or swam in the canal. So it may well be that the locals have been wide-eyed over there by the bridge.

A little further on, in Nieuwesluis, there is a café called ‘de rustende jager’. It is visited now and again.

Sports that were practised in Germany are picked up again as much as possible.
For example, for a while there was a football team that played in the local league. Table tennis could be played.

Those with money can afford to go to the cinema in Hippolytushoef or to Alkmaar or Amsterdam. There is no curfew. Everyone can go to bed whenever he or she wants as long as you are on time the next morning.

The Werkdorp is a colourful gathering, with kindred spirits looking out for each other. Like the political refugees, the Zionists and the other refugees. The leadership encourages this to some extent. For example, the Palestinians are housed together. Not everyone is active in the experience of Judaism. For them, being a German came first, then being a Jew.

There are many discussions about everything that concerns them. What binds them is the uncertain future and the worries about home. 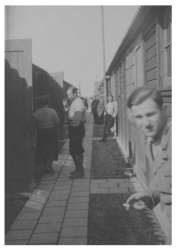 Men and women live strictly separated. There are two separate women’s barracks. According to the stories, the women’s barracks are more convivial than those of the men. This is not the fault of the management, but of the residents themselves.
The men and women are not separated in all respects. They are young people and they fall in love. The hay barn is a popular place.  This creates problems for the management. If a woman gets pregnant unintentionally, the couple is sent away without mercy. A couple that wants to get married is also sent away. There is one married couple, but the husband has an executive task besides being a student. They are given a place to live just outside the Working Village. Later, it becomes possible for them to stay in the Werkdorp when they get married, like Heinz Durlacher and Ruth Durlacher-Horn. In the case of Lothar Leyser and Alice Leyser-Rechnitz she goes to Amsterdam to her mother and grandmother for the birth of their child. And after some time returns to the Working Village.

There are also dabbles with local girls, which in one well-known case lead to unwanted consequences.
The young man emigrates to America and receives a very angry letter from Gertrude van Tijn.

Gert Blauboer lived a few farms away. He becomes friends with work leader Menni de Vries and his brother-in-law Kurt Winter. He writes in his memoirs: ‘They were generally people of our own age and I think it was normal to come into contact with them. You heard their history; most of them came from families of intellectuals or businessmen. They had generally come out of Germany with only their shirts on. From the stories of these boys and girls, their treatment and humiliation, we could already smell the bad breath of the Nazi regime’.

Finance
Finances play a major role in daily life. The Dutch government has decided that the work village is not allowed to sell its products. Competition is not tolerated. In the beginning, there was nothing to sell, but later the farm produces too much to consume itself. One solution is to supply vegetables to Jewish traders in Amsterdam or to give products away to charities. The same happened with the work of the crafts pupils. For example, work leader Kemmeren was happy to receive a wall unit for his sitting room.

Of course, this does prevent the Working Village from being self-supporting. But neither is it intended that the Committee for Jewish Refugees or the Foundation for Jewish Labour should be responsible for running it. The idea is that the students pay for their stay and education themselves. For ꬵl. 6.50 they can stay for a week. On top of that comes 50 cents pocket money. Visits to the doctor or dentist are charged extra. Parents or relatives contribute what they can. As time goes by, this becomes more difficult. No one receives a higher salary or income and the savings run out. Gertrude van Tijn urges people to ask for money from relatives in England or America, but the political situation increasingly prevents the transfer of money from abroad. When nothing works out, the Committee pays. The pocket money then drops to a few dimes.