Learning on the job

Education
Among some inhabitants of the polder there was the opinion that a Jew could not become a farmer. They only had experience with them as traders or butchers. But in the Werkdorp, agriculture and cattle breeding were the main activities, and Jewish farmers did emerge who did very well here and later in Palestine.

There were also technical schools, which were also important for the Werkdorp itself. The need influenced the number of pupils.
Starting with woodworking. The first lessons were dedicated to carpentry of the beds for the living barracks, then the tables and chairs. Later, the pupils made the entire furnishings for the community building. And furniture is made for third parties. Sometimes for free, sometimes for sale.

Electrical engineering: The entire complex is to be equipped with electricity, an opportunity to train as an electrician. En passant a telephone connection/central switchboard is realised as well. Training will continue after construction is complete; maintenance also requires skilled workers.

The same goes for the sewerage and water pipes. Showers and toilets are constructed under our own management. And the construction of a system that collects the spontaneously rising methane gas in the ditch and uses it for heating.
The metalworker’s/blacksmith’s training is highly valued and of great benefit to the agricultural sector. This training offers very good opportunities for emigration.

Do the various schools produce good craftsmen? That varies. The practice can be a limiting factor. Especially in the beginning it is difficult. Due to a lack of money, one has to do without good tools. The lack of electricity doesn’t help either. Sawing and drilling holes in wood and iron is done by hand. There are no milling machines. Moreover, only skills that are useful on the spot are trained.
Another factor is the pupils themselves. At home in Germany, they have had very different ideals from becoming farmers or carpenters. Or a housekeeper. So in some cases, the interest is not great. Nor is the commitment. It is up to the teachers, both of Jewish and of Dutch origin, to make something of it.

Although in principle it is assumed that the school can accommodate 250 pupils, in practice until the end of 1938, there are on average 160 pupils. In June 1935, there are 60 agriculture and horticulture apprentices, 60 crafts apprentices and 25 domestic science apprentices. By the end of 1938, there were 120 agricultural and horticultural apprentices, 35 craftsmen and 30 domestic science apprentices. The boom in residents from the children’s transports is still to come.
Not everyone who has completed his or her education succeeds in emigrating immediately, even though that is the requirement of the Dutch government. Some stay, others wait their time in Amsterdam.

Emigration
When the time comes to emigrate, a lot of paperwork has to be wrestled with first. A task for Gertrude van Tijn. Every country has different immigration requirements.
On top of that, the people involved would like to go home one last time to say goodbye. That can be arranged. Until the end of 1936 it is no problem for a Jew to travel into Germany. After that there is a travel ban. Then the family comes to the Netherlands, insofar as that is not made impossible. In the end, the last emigrants left before the war without having seen their families at all.
For the Palestinians, a chronic shortage of Palestine certificates is the key to gaining access to the country. This is a major headache for Gertrude van Tijn. She does what she can. The candidates, in turn, do the same. A married couple is allowed to enter Palestine on one certificate. In spite of her objections, marriages of convenience are arranged. A journey to the promised land, in many cases via the port of Marseille or Trieste, costs ꬵ 90.15, everything included, including a return ticket to Berlin to pick up the necessary papers. Please pay for everything yourself. If not, there are several funds for this. In total 157 pupils have reached Palestine, including the passengers of the Dora.
Going to England is the cheapest: the crossing costs ꬵ 20.55. Photos, pass and visa together almost ꬵ 12. But England does not like these refugees. A trip to the USA is very expensive: a total of ꬵ 213.50 in 1938. And there too, the brakes are put on.
Via Lisbon and Genoa there are passenger lines to North and South America (a popular emigration destination) and Australia. South Africa also received a few Werkdorpers.

As time went by, the political situation made it more and more difficult to leave the Labour Village after the training. Witness the experience of Norbert Abrahamsohn, born in Hamburg in and murdered in Mauthausen in September 1941. He arrived in the Werkdorp with an entry permit for Australia where family was staying. On 5 September 1939 his ship the SS ‘Triestino’ departed from Genoa. The political situation prevents him from travelling to Italy. Then, in December 1939, he receives word that his permit has been revoked. Australia closes its borders to refugees. A desperate attempt to reach Canada also fails. Norbert makes his will and encloses a photograph in which he is milking a cow.
In the meantime, Palestinians are watching the slow influx of chaloetsim (Palestine pioneers) from Europe with growing exasperation. At the end of 1938 the Hagana, a Zionist Jewish paramilitary organisation, planned a daring action from Palestine through the organisation Alyah Bet (illegal emigration).
An old coal ship was bought and the Tjaldur was renamed the Dora. The hold was converted into simple passenger accommodation. In December 1938, 76 Werkdorp people were selected to go along, despite Gertrude van Tijn’s earlier refusals. They left the Werkdorp to wait for the departure in Beverwijk, Assendelft and Heemskerk. Contrary to expectations, it would take until July 1939 before they could leave. Then 300 chaloetsim from the Netherlands embark, as well as another 150 refugees from Belgium who boarded in Antwerp. After an adventurous trip they all arrive safely in Palestine, where they are welcomed on the beach with clean and dry clothes and (false) papers. This just about doubles the number of emigrated Werkdorpers.

More about the Dora: The Dora Ship (danielabraham.net) 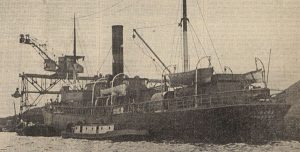 Thanks to the departure of this large group, around 100 youths from the Children’s Transports can leave the children’s homes and orphanages for a place in the Werkdorp. At the same time, the farm can expand by renting 133 hectares of undeveloped land on the other side of the polder so that there is a workplace for everyone. A total of 364 pupils ultimately emigrated, according to the authors Stegeman and Vorsteveld in their book “Het Joodse Werkdorp in de Wieringermeer 1934-1941”.