Josef Abrahams was born on October 6, 1921, in Gladbeck in the Ruhr region. The town is located 15 kilometers above Essen.

Josef arrived in the Netherlands in January 1939 together with his sister Margot (b. 1929) on a children’s transport. Margot returns to her parents on December 5, 1941. She and her parents are deported from Münster to Theresienstadt on 31 July 1942. All three are transferred to Auschwitz on 16 October 1944 and murdered there.

Josef went to the Werkdorp after a short year’s stay in the Dommel House. After the evacuation of the Werkdorp on 20 March 1941, Josef was given a place on Jekerstraat. He lived there with 11 other Werkdorp people.

Josef belonged to the June group, workers who were rounded up in the 2nd major razzia in Amsterdam on 11 June 1941 and deported to Mauthausen via Schoorl camp. There they had to perform forced labor in stone quarries and/or be subjected to medical experiments. Within three months of arrival, Josef was murdered on September 20, 1941. 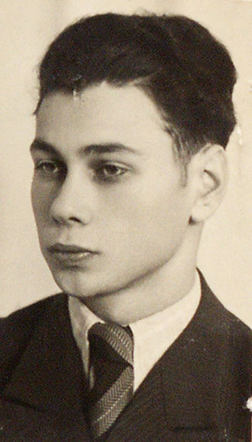