Kurt Erich Moser was born on 3 June 1920 in Wuppertal. He is the middle one in a family of three children. In November 1938 he comes from Turin to the Werkdorp in Wieringermeer. His older brother Hans (1918) was also staying there. After the Werkdorp closed on 1 August 1941, both joined the Deventer Association, as did his later wife Ruth.

In August 1941 he went to work as a farmhand with the Sanderman family on the Leuvelt farm at Hasselo no. 5, in the municipality of Weerselo. He married the pregnant Ruth Sara Liemann from Berlin on 11-08-1942 in Weerselo. His parents could not give permission, as they were already untraceable. By order of Justice Almelo dispensation of announcement and waiting period was granted. Witnesses to the marriage are father and son Sanderman. After their marriage they both left for Amsterdam, where their son Rudi Max (Reuven) was born in December 1942.

Fate of the family

His wife Ruth Liemann managed to escape with their son and went into hiding in Velp, where their second son Kurt Erich jr. was born in 1944. Son Reuven was brought as a 9-month-old baby by the underground to Cornelis and Isabella Pouwer-Ganzevoort in Arnhem. After the war he was picked up by his mother. This was a traumatic event for him and his foster parents. His mother remarried shortly after the war, and Reuven was later, as a ‘difficult’ baby, brought to his uncle Hans (Yochanan) and later adopted by him and grew up in that family. Kurt Erich’s brother Hans survived Bergen-Belsen and later left for Israel. His sister Eva left on the last transport of children to England and also survived. Kurt-Erich’s parents were transported from Wuppertal and murdered in Minsk on 10 November 1941. 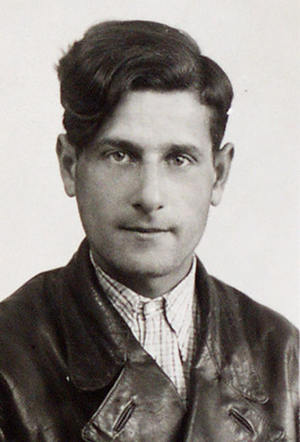