Mia de Vries was born on 25 February 1938 in Amsterdam. She grows up in the Werkdorp. Her father is an agricultural labourer. He arrives in March 1934 as one of the first pioneers together with the agricultural labourer A. van Kemmeren. On 13 February 1936, Rosa Winter, Mia’s mother, arrived in the Werkdorp with a group of seven other pioneers from Cologne. Rosa meets Menni de Vries, they fall in love and they marry on 24-12-1937. That is two months before their first child Mia de Vries is born. A year and a half later her brother Frits Ino de Vries is born.

When the Werkdorp is evacuated on 20 March 1941, the De Vries family is among the 60 people who stay to take care of the running business and to bring in the harvest. In August, the Werkdorp was finally closed down and the De Vries family left for Zwolle. Father Menni found work on the farm of the Slingerland family in Olst, but this ended in November 1941. After that he worked here and there as a casual labourer. When he had no work, the family was supported by the Jewish Committee.  He also became the doorkeeper of the Jewish hospital in Zwolle.

On 6 April 1943, the occupying authorities announced that all Jews had to leave the provinces of Overijssel and Gelderland before 10 April 1943. The De Vries family was arrested on 9 April 1943 and imprisoned in camp Vught. From there Mia, her mother Rosa and her brother Frtis Ino were transferred to camp Westerbork two months later. Father Menni followed a month later. After a stay of three months in Westerbork, they were transported to Auschwitz. Menni performed compulsory labour for a year and was then murdered. Mia, her mother Rosa and her brother Fritz were killed immediately upon arrival on 3 September 1943. 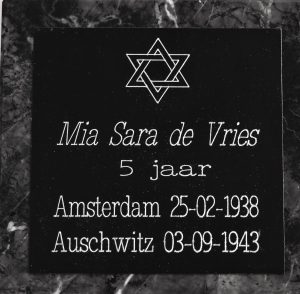