Rosa was born on 22 June 1916 and grew up in the city of Cologne. She arrives in the Werkdorp on 13 February 1936 with a group of seven other pioneers from Cologne. There she met Menni de Vries, they fell in love and got married on 24-12-1937. That is two months before their first child Mia de Vries is born. A year and a half later their son Frits Ino de Vries was born.

When the Werkdorp was evacuated on 20 March 1941, the De Vries family was among those who stayed to take care of the running matters. In August the Werkdorp was finally closed down and the De Vries family left for Zwolle. Menni found work on the farm of the Slingerland family in Olst, but this ended in November 1941. After that he worked at several places as a casual labourer. When he had no work, the family was supported by the Jewish Committee.  He still worked in the small Jewish hospital as a doorman.

Delay but no adjustment

Menni tried, as his Sperre number 35726 shows, to get his family to postpone transport via the Calmeyer list. Calmeyer investigated for all Jews who indicated that they had their roots in Portugal whether they were full Jews or not. Many Jews from Portugal indicated that their Jewish ancestry had been so diluted by marriages with Christians that they were no longer Jews in the Nazi definition.

It is possible that Menni took this route, whether or not to stall for time and that they initially assumed that Rosa and the children were also covered by his number – this was common in the beginning – and that later it turned out that Rosa had to apply separately for herself and the children. So it could also be that they have tried to delay even more. Because as long as there was no decisiveness from Calmeyer and his people about whether or not you were full Jew, you were not going on transport. On the Jewish Council information card of Rosa and their children the Calmeyer number 39649 is mentioned. So research was done for both Menni and Rosa. However, it was of no avail to them.

On 6 April 1943 the occupier proclaimed that all Jews must have left the provinces of Overijssel and Gelderland before 10 April 1943. The De Vries family was arrested on 9 April 1943 and put on transport to camp Vught. From there Rosa is transferred to camp Westerbork on 6 June 1943. Rosa is placed in barrack 62, the children in the hospital of camp Westerbork. Menni follows a month later. After a stay of three months in Westerbork they are transported to Auschwitz. Menni does compulsory labour for a year and is then murdered.

Rosa and the two children Mia and Fritz are murdered immediately upon arrival on 3 September 1943. Rosa’s widowed mother is transported in 1941 and is murdered in Kulmhof in May 1942. 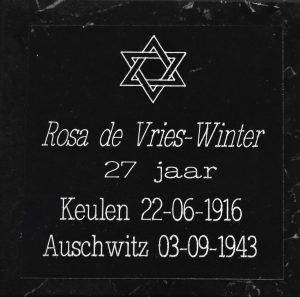