Menni was born in 1901 in Leer, a town in northern Germany on the Ems, 35 km from the city of Emden. He grew up in a family with three children. East Friesland is the land of cattle farmers, cattle dealers, cattle markets and slaughterhouses. After the National Socialists came to power in 1933, a ban on slaughtering in all abattoirs was immediately announced for East Friesland, to which Leer belonged. Also the slaughter knives had to be handed in and destroyed. In the cattle market of Leer a section was fenced off for Jews.

In 1939 all Jews in Leer were forced to move to the so-called Jewish houses. And at the beginning of 1940 all Jews had to leave Leer. Menni’s parents moved to Berlin. From Berlin they were deported to Theresienstadt in September 1942, Menni’s father was killed in June 1943, his mother a year later in Auschwitz.

His older brother Ludwig (1899) was convicted under the so-called “Heimtückewet” (Law on the Death Penalty) of 20 December 1934. Freely translated, this was the malice law on the basis of which anyone who ridiculed or insulted the Nazi ideology in any form could be sentenced. On 16 June 1938, Ludwig is sentenced to 6 times 5 years in prison for ‘cheating’. He was transferred to Buchenwald and died there on 26 February 1941. His younger sister Frieda (1904) living at Lippehnerstrasse 35 in Berlin is transported to Auschwitz on the 28th East Transport on 3 February 1943. She and her 3-year old son Jonathan were murdered immediately upon arrival.

Menni fled Leer in 1934 and went to the Netherlands. On 24 April 1934 he is one of the first pioneers to settle in the newly reclaimed polder Wieringermeer. From the beginning of his pioneering period, his work focuses on livestock. He joins the staff of the Werkdorp and is appointed foreman.

In November 1936, Rosa Winter, together with other pioneers from Cologne, arrived at the Werkdorp. They fall in love and marry on 24 December 1937. Then the first child was born, Mia de Vries, two months later on 25 February 1938 in Amsterdam. And a year and a half later the second, Frits Ino, was born on 24 September 1939, also in Amsterdam.

After the Werkdorp was evacuated on 20 March 1941, he and his family were among those who stayed. When the camp was finally closed down in August 1941, the family moved to Zwolle. Menni found work on the farm of the Slingerland family in Olst, but this work ended in November 1941. After that he worked at several places as a casual labourer. And when he had no work, the family was supported by the Jewish Committee. In Zwolle, he worked as a doorman in the small Jewish hospital.

Menni tried, as his Sperre number 35726 shows, to get his family postponed deportation via the Calmeyer list. Calmeyer checked whether all Jews who stated that they had their roots in Portugal were full Jews. Many Jews from Portugal indicated that their Jewish ancestry had been so diluted by marriages with Christians that they were no longer Jews in the Nazi definition.

It is possible that Menni took this route, whether or not to stall for time and that they initially assumed that Rosa and the children were also covered by his number – this was common in the beginning – and that later it turned out that Rosa had to apply separately for herself and the children. So it could also be that they have tried to delay even more. Because as long as there was no decisiveness from Calmeyer and his people about whether or not you were full Jew, you were not going on transport. On the Jewish Council information card of Rosa and their children the Calmeyer number 39649 is mentioned. So research was done for both Menni and Rosa. However, it was of no avail to them.

On 6 April 1943 the occupier proclaimed that all Jews must have left the province of Overijssel and Gelderland before 10 April 1943. The de Vries family was arrested on 9 April 1943 and imprisoned in camp Vught. Two months later, on 7 June 1943, Rosa, Mia and Fritz are taken to camp Westerbork. Rosa is placed in barrack 62, both children end up in the hospital of camp Westerbork. Menni is transported to Westerbork one month later on 2 July 1943. By the end of August 1943 they are transported to Auschwitz. Rosa and the two children Mia and Fritz are murdered immediately upon arrival, Menni after a short year of hard labour on 31 March 1944. 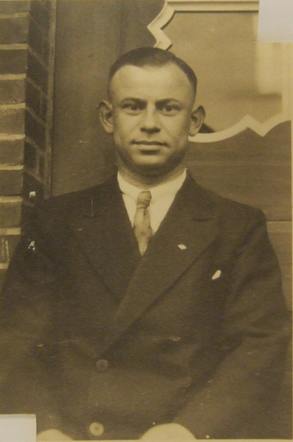