Wolfgang was born on 30 July 1927 in Breslau. He was 10 years old when he fled Nazi Germany with his parents and his brother Fritz (1921). Initially they went to live on Oude Leliestraat in Amsterdam. After a year they move to the same square where the Frank family had lived before moving to the Achterhuis (the Secret Annex) on Prinsengracht. It is then December 1938. Fritz and Wolfgang both lived with their parents until Fritz was arrested in the razzia of 11 June 1941 and transported via Schoorl to Mauthausen, where he was killed on 10 October 1941.

Wolfgang’s parents were arrested in Amsterdam on 20 April 1943 and transported to Westerbork.  One week later they were transported to Theresienstadt. For a short time Wolfgang found shelter in the youth house of the Jewish Council at Plantage Franschelaan. By the end of May 1943, a month after his parents, Wolfgang arrived in Westerbork.

More than a year later, on 29 September 1944, his father went from Theresienstadt to Auschwitz. His mother followed the same route a week later. She was murdered almost immediately upon arrival in Auschwitz. Wolfgang’s father was killed six months later.

After six months in camp Westerbork Wolfgang was transported to Theresienstadt on 18 January 1944, probably thinking he would meet his parents there again. He was killed there six months later, on 30 June 1944. 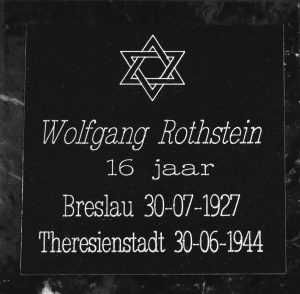