Lothar Rothschild was born on 22 August 1908 in Rexingen, the same place where his parents and brother Hans Max (b. 1917) were born and raised. At the age of 15 Lothar moved to Bambeck-Altona to train as a merchant.

In 1930 the whole Rothschild family moved to Villingen-Schwenningen and took up residence at 27 Waldstrasse. His father, who until then had been a cattle trader, went to work in his brother Moritz’s estate agency. Lothar is a member of the social-democratic oriented youth association SAJ for 14 to 20 year olds. The SAJ is banned in 1933.

Lothar’s mother died in 1937. His father and younger brother Hans Max flee to Brazil in 1938 and they survive the war.

Lothar moves to Nuremberg in 1936. He was arrested there for alleged racial disgrace and ended up in the Dresden penitentiary. After a two-year stay and the many beatings by the Gestapo, he was a physical and mental wreck. After his release, with the help of friends, he found a place in the Committee for Jewish Refugees in Apeldoorn.      .

On 29 April 1939 Lothar was admitted to the Central Israelite Insane Asylum, Het Apeldoornse Bos. There he befriends the nurse Ruth ten Brink from Bramsche.

After staying there for almost four years, Lothar was put on transport on 22 January 1943, just like all the other residents of the institution. This concerned 869 patients and 592 residents of Apeldoorn and the Jewish staff. They were deported directly to Auschwitz, where they were murdered immediately upon arrival on 25 January 1943. 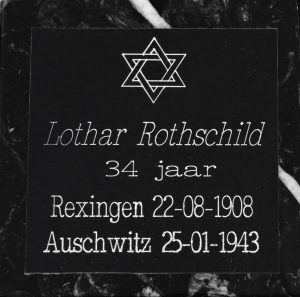