Amalia Frankenhuis was born on 28 December 1919 in Almelo. She is the middle one from a family with three children. Her father had a butcher’s shop in Almelo and was also a veterinarian. Amalia became a ladies’ hairdresser and that is how she met Kurt Salo Wiener. He lived with a group of Palestine Pioneers at Werfstraat 11 in Almelo. He came to live there on 24 May 1942.
They married on 6 October 1942 in camp Westerbork. Her parents were still present at the wedding as witnesses. Three days before they were arrested in Almelo and taken to camp Westerbork. Her father had been arrested before and from 27 August 1942 he was in labour camp Overvest in Kesteren. They were transported on 19 October and Amalia and her parents were murdered immediately upon arrival on 22 October 1942. Kurt Salo was selected for the labour camp on arrival in Auschwitz, but was murdered six months later, in February 1943.

Her older sister Leentje (1918) was put on transport on 31 August 1942, just like her younger brother Salomon. Leentje was killed immediately upon arrival. Salomon is listed as having died on 31 March 1944 in Central Europe 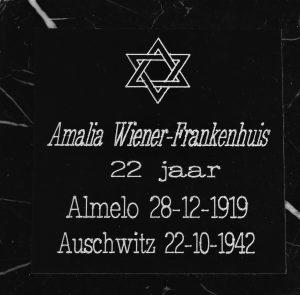