Bernhard Jacobsohn (1883) was the eldest in a family of six children. Besides a brother Sally (1890) Bernhard had four sisters. After Dora, the eldest sister (1886), comes Fanny (1889). They were all born in Memel, today’s Klaipeda, the third largest city in Lithuania. The two youngest Ida (1901) and Rosa (1902) were born in Darmstadt.

Bernhard’s father was a wood merchant. The family emigrated for a second time and moved to Amsterdam in 1912, except for the two sons Sally and Bernhard. They stayed in Darmstadt and both moved to Cologne. In October 1913, Bernhard’s father explores the timber market in the United States.

In the early 1930s, at the age of 48, Bernhard moved from Cologne to Amsterdam. He works there as a timber agent. The connection with Werkdorp is that he was probably their regular supplier of wood.
Early in October 1942, Bernhard was put on the 25th transport to Auschwitz and was murdered three days later on 8 October. His parents died shortly after each other in the Netherlands before the war.
Sisters Dora and Rosa went into hiding in Heerenveen and survived. Dora survives and dies in Amsterdam in 1983, Rosa leaves via the U.S.A. for Israel and dies in Haifa in 1983. Fanny survives and emigrates to the US. Ida survives and dies in Amsterdam in 1989.
Sally was transported to Sobibor in June 1943 and was murdered there on 4 June 1943. 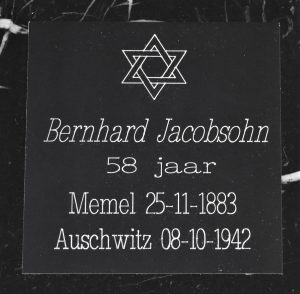