Günther Georg Höxter was born on 5 May 1925 in Bibra. The village of Bibra is located 100 km north of Würzburg.

Günther’s father was transferred to Buchenwald camp after Kristallnacht and was imprisoned from 9 November 1938 to 8 December 1938. His parents often have to move to ‘Judenhäuser’ after his release.

The parents have plans to emigrate with S.S. Cordillera to Ecuador on 30 July 1939. They have the means, the visas and the passage tickets. But each time the Nazis put forward reasons which prevented the departure At the beginning of January 1942 his parents were deported to the ghetto in Riga (KZ kampf Riga) and in October 1944 they were transferred to camp Stutthof. Both were killed there after a few months.

His sister Margot (1920) survived Auschwitz and was liberated from the camp on 27 January 1945. She emigrated to the USA and died there in 2014.

Günther came to the Netherlands early in 1939 on a children’s transport. After staying a year in the Dommelhuis in Eindhoven, he went to the Werkdorp at the beginning of February 1940. There he worked as a farmer and electrician. He was a Zionist.

He started working as a farmer. After the Werkdorp was evacuated on 20 March 1941, he stayed with foster families for more than a year. A week before his forced departure to Westerbork, he joined the other Werkdorp residents in the Jewish Council’s youth centre. Günther was killed on 2 September 1942. 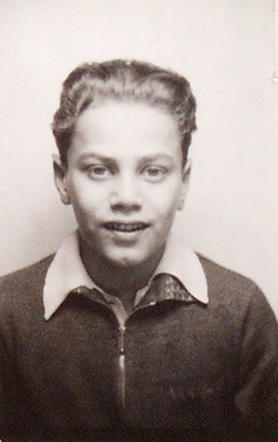