Carmen was born on 23 September 1923 in Gera. Gera is a town 135 km north of Nuremberg. The family moved to Wiesbaden-Biebrich in 1929. Her father is director of a liqueur factory there until 1935. From 1936 he is a sales representative for several companies and sells jewellery to jewellers.

A few days after Kristallnacht her father fled to the Netherlands looking for a home for the family. Mother Jeanne and Carmen were forced by the Nazi regime to move to Friedrichstrasse in mid-March 1939, where they could sublet from Jeanne’s sister. Father Louis initially stayed in Nijmegen and after some wanderings found a home for his family in Amsterdam. At the end of August 1939 the three of them go and live at Plantage Badlaan. Carmen started working as a nurse in the Dillenberg nursing home. After that she worked as a housekeeper in the youth home of the Jewish Council. Because of this job she had a Sperre.

The marriage of Carmen and Manfred

She married Manfred Laupheimer on 16 September 1942. After the Werkdorp was closed down for good, he worked for a while with a farmer in Aalsmeer and then returned to Amsterdam. Hij lived with Carmen and her parents on Plantage Badlaan from October 1942.
By the end of May 1943 they were rounded up and deported to camp Westerbork. Early March 1944 they are both transported to Auschwitz and four months later they are both killed. On 20 September 1942, the father – then aged 58 – started working as a nurse in the Dillenberg nursing home. Because of his position he had a ‘sperr’. But also for Carmen’s parents this is a temporary respite. On 8 June 1943 they were transported to Sobibor and were killed immediately upon arrival. 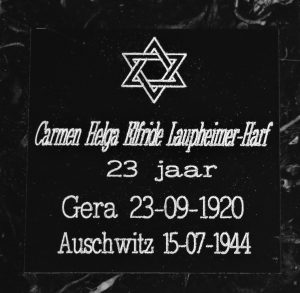