Manfred Laupheimer grew up in a family with three children. The eldest (1897) Franz Josef died at the age of twelve. His elder sister Else (1900) threatened to be transported in early 1945, but was prevented from doing so and survived the war, dying in Stuttgart in 1996. Manfred’s parents also stayed in Stuttgart.
Manfred’s father had been a grain merchant since 1892 and supplied breweries, among other things. In 1938 the parents were forced to move to the Jewish old people’s home at 9 Heidehof Street in Stuttgart. In 1939 Manfred’s father lost his work permit. His mother Milly had great musical talent and supported the family from then on as a music teacher.

In March 1942 they were forced to live in an old ruined castle Dellmensingen in Ulm. Not long after that they were transported and from 22 August 1942 onwards they were imprisoned in Theresienstadt. Father Adolf was killed a month later. Mother Milly was transported to Auschwitz 21 months later and was killed there in the summer of 1944.

From lawyer to florist

On 6 June 1932, Manfred Laupheimer became the youngest court referee of the district of Wurtemberg and was assigned the Stuttgart court. One year later, on 26 June 1933, he was dismissed from his position at this court prefecture on the basis of a new professional civil servant act. One year after the Nazi takeover, Manfred realises that there is no future for him in Germany and leaves for the Netherlands. He worked as a farmer in Zeeland for over two years before moving to the Werkdorp. There he becomes proficient in horticulture and flower-growing. He calls himself a florist.

He was one of the sixty people who stayed after the Werkdorp was evacuated on 20 March 1941. After the final evacuation of Werkdorp he found a job and a place to live in a flower farm in Aalsmeer.

The marriage of Manfred and Carmen

In the summer of 1942, he moved to Amsterdam and got a job in the allotment garden complex Zeeburgerdijk of the Jewish Council. Because of this function he has a ‘sperr’. He got acquainted with Carmen Harf, whom he married on 16 September 1942. They went to live with Carmen’s parents on Plantage Badlaan in Amsterdam.

At the beginning of November 1942, he reported the burglary of a construction site on the Zeeburgerdijk in Amsterdam. Potatoes (200kg), beets (50kg), white cabbage (25kg), carrots, leeks and celeriac were stolen.

In May 1943 they are arrested and deported to camp Westerbork. In March 1944 they were transported. Carmen was murdered there in mid-July 1944, Manfred at the end of July. 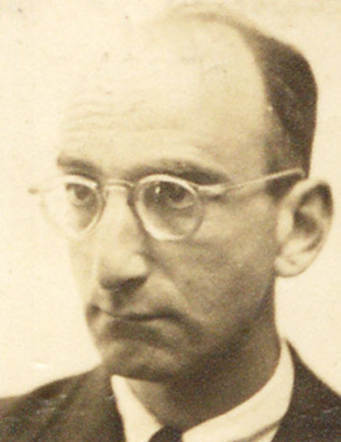