Benno’s mother and sister Ruth were transported to Auschwitz on 4 March 1943 and were presumably murdered immediately upon arrival.

Benno contracted scarlet fever in 1928 and survived at age 12. He went to secondary school and completed a three-year higher secondary education. He then went on to train as a radio technician and practised this profession. In the spring of 1939, he flees to the Netherlands and reports to the Werkdorp. There he worked both as a farmer and an electrician. After the Werkdorp was evacuated on 20 March 1941, he found shelter on Waalstraat in Amsterdam. In March 1943 he moved to Geulstraat. He had hardly lived there when his bicycle, which he had put in front of his house, was stolen.

He entered the service of the Jewish Council and in the summer of 1942 got a job at HAV, or Help to Departures, on Bachstraat in Amsterdam. The function gave him a ‘sperr’ and this function gave him a delay but not a reprieve. It was August 1944 when he was arrested and deported to camp Westerbork.

A month later he goes on the last transport to Auschwitz. From there he was deported to Buchenwald camp and then back east to Gross Rosen camp. He arrived there on 9 February 1945 and was already in a very bad shape. He still weighs 45 kg and has frozen fingers on both hands. There is no further news about Erich Baruch. Five days later camp Gross Rosen is liberated by the Russians. 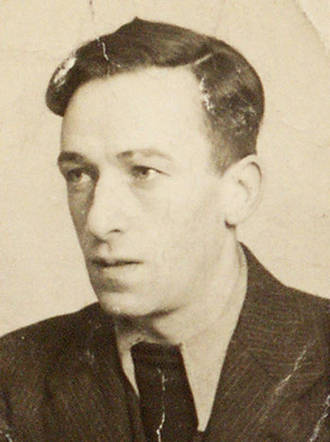