Horst Levenbach was born on November 18, 1899 in Amsterdam. His mother (1869) went into hiding in Maarsen and survived the war in the Netherlands. His father died in 1928. His oldest sister Ella Catharina (1894) emigrated to the U.S.A. in December 1940. His oldest brother Martin Emile (1895) was killed in Bergen Belsen. His younger brother Hendrik Otto (1906) survived the war in the Netherlands.

Ernst Levenbach follows the trade school education and becomes a teacher of accountancy. On 15 May 1918, he is approved for military service. He is considered suitable for the infantry and then the artillery. He himself has no preference. He is also considered suitable for officer training. On 6 January 1919 he was discharged from service `because of physical defects’. He lived successively in Enschede, Maartensdijk and Zutphen and was an (assistant) accountant. When the Second World War had just broken out in the Netherlands, he reported to the Werkdorp. He worked there as a gardener. After the Werkdorp was evacuated on 20 March 1941, he found shelter in Hoorn and started working as a gardener, probably for private individuals. Another Werkdorp employee, Heinz Spittel, lived at the same address for a while; he may have been able to use Ernst’s house. At the end of 1942, Ernst went to live with his mother in Amsterdam.

Ernst was arrested in Rotterdam on 4 August 1943 and detained there until 10 September.He was then transferred to Camp Vught. On 15 November he was transported to Camp Westerbork. The very next day he is transported to Auschwitz. He was murdered within two months of his arrival, on 2 January 1944. 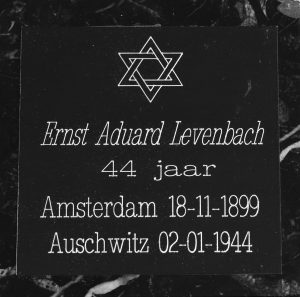