Ernst Prager was born on 13 April 1917 in Tichau in Poland. The town is located 80 kilometres west of Krakow.

Ernst had a younger sister, Ingeborg Inge (1926) and a younger brother, Günter (1921). Günter went with a children’s transport to England, survived the war and died in London in 1993. Ernst’s mother and his sister Ingeborg were transported from Berlin to Riga on 26 October 1942. They were killed three days later. Ernst’s father died in Berlin on 18 June 1941.

Ernst travelled to the Netherlands immediately after Kristallnacht on 9 November 1938 and reported at the end of December 1938 in the Werkdorp. There he was trained and worked as a carpenter. After the Werkdorp was evacuated on 20 March 1941, he was taken in by the Nijkerk family at Olympiaplein in Amsterdam. He became friends with Mirjam Ohringer and they fell in love. She was in class 4G at the Jewish Lyceum in Amsterdam. After staying in Amsterdam for less than three months, he was arrested during the 2nd razzia in Amsterdam.

Ernst belonged to the June group of 57 Werkdorpers who were transported to Mauthausen via Schoorl. Almost everyone was dead within six months. Including Ernst Prager, who was murdered on 17 September 1941.

In an interview with Mirjam Ohringer from 2013 she says the following: ‘On 11 June 1941 my friend Ernst Prager came to get me from school. He had fled from Berlin and lived with a nice family on Olympiaplein. The lady of the house had given him a “Rijksdaalder”. “I’ll use it to buy a present for their child’s birthday,” he said. After we had bought the present in an office shop in the Kalverstraat, Ernst told us that he wanted to do a maths course. “Can I borrow your compass then?”, he asked. We said goodbye at the tram stop. I cycled back to the shop to buy him a pair of compasses, because that evening he would pick me up at ten. At eight o’clock I arrived at a meeting and heard that Jewish boys were taken from their homes. I quickly cycled to Ernst to warn him. The lady of the house opened the door and said: “Ernst has gone”. Later it turned out that he had been caught nearby. As soon as I knew that he was imprisoned in camp Schoorl, I wrote to Ernst that I hoped to see him again very soon. No idea if he got that letter. On my first school day at the Joodsch Lyceum, 15 October 1941, I was at home having dinner, when the doorbell rang. A friend told me that Ernst had been killed in camp Mauthausen. That was the biggest shock of my life. 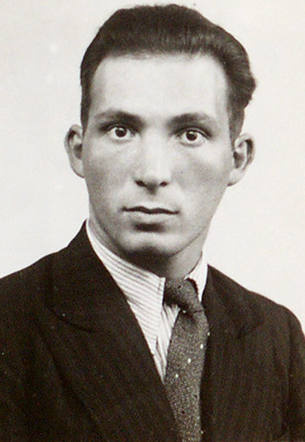