Ernst Schlomiuk was born on 3 May 1923 in Vienna. He came to the Netherlands in March 1939 at the age of 15. In the Werkdorp where he arrived in February 1940, he was educated and worked as a farmer. He was not a Zionist.

His parents were married in 1920. His mother moved to The Hague in September 1931 when Ernst was 8 years old. There she went to work as a servant with the Van Dam family at Statenlaan 74. A year later she returns to Vienna, but two years later she is separated again and comes back to The Hague. At the end of 1934 she goes to Amsterdam for three months to work as a servant. In January 1935 she returns to the Van Dam family in The Hague where she stays until August 1940. Then she goes to Amsterdam again to work as a servant at three different addresses. On 15 April 1942 she entered the service of the rest home Dr. Auerbach as a cook, where she also lived.

Ernst and his mother did not live together in Amsterdam from August 1940 onwards, but they did have the opportunity to meet each other. This came to an end when Ernst had to take part in the 1st transport to Auschwitz on 15 July 1942. He was murdered on 27 August 1942. His mother had a sperr because of her job as a cook, but was arrested on 20 June 1943 and transported to Sobibor a few weeks later, where she was killed immediately upon arrival. The fate of Ernst’s father is unknown. 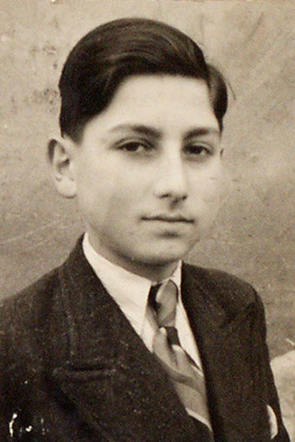 Last known addresses in The Netherland