Jenni Elli Hans was born on 4 October 1919 in Essen. Immediately after Kristallnacht she flees to the Netherlands. She starts working as a housekeeper. Mid 1940 she moved to Jekerstraat 5, a house where several Palestine Pioneers lived. This is probably where she met Kurt Schlesinger.

She got engaged to Kurt on 19 June 1942. They married on 11 July 1942. A few days later they go on the first transport to Auschwitz. Her husband Kurt was killed after a month, Jenni Elli more than a month later on 23 September 1942. 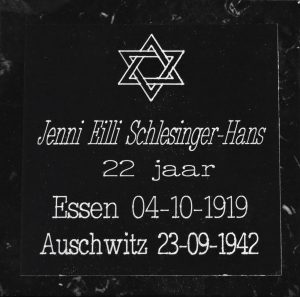