He married Hilde Altenberg on 10 July 1942. He knew her from Berlin. After the evacuation of the labour village on 20 March 1941 she lives in Amsterdam in Waalstraat, around the corner of Merwedeplein, where Franz Hermann came to live in the autumn of 1940.
Five days after their marriage they were put on the first transport to Auschwitz and within three weeks, on 8 August, Franz was murdered. His wife Hilde was murdered on 30 September 1942.
The fate of Franz Hermann’s parents is unknown. 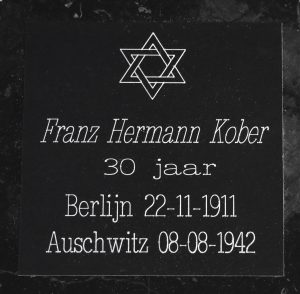