Hans was born on 2 October 1925 in Künzelsau. Künzelsau is a town 95 km north-east of Stuttgart. After Kristallnacht, the Netherlands opened the already hermetically sealed borders for a while to admit 2000 children without parents. There was no room for them. Many parents in Germany seized this opportunity with both hands to safeguard their child or children from an increasingly ominous future. Hans, a 13-year old boy, came to the Netherlands early January 1939 on one of those children’s transports.

His older brother Justin (1921) and younger sister Susi (1933) escaped to England in 1939. His parents were about to emigrate to Argentina that same year, they even had a visa for it. His father was a cattle trader and saw a future for himself there. However, they lacked the means. Despite the fact that the ‘Hilfsverein’ would pay for the journey, it never happened. On 1 December 1941 Hans’ parents were arrested and deported via Stuttgart to Aussenlager Ghetto Riga, where they were both killed shortly after arrival.

After his initial reception in a children’s home in Eindhoven, Hans was admitted to the Werkdorp despite his young age of 14. There he worked as a farmer. After the Werkdorp was evacuated on 20 March 1941, Hans was taken in by the Birnbaum family on Grensstraat in Amsterdam. As soon as the Youth Home of the Jewish Council opened its doors, he moved there and stayed with them from November 1941 until early July 1942. He was put on the list for the first transport to Auschwitz and within three months of arrival he was murdered. 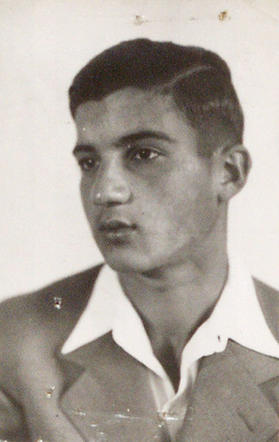