Gustav Kaminker was born on November 1, 1920 in Vienna. His mother died when he was 12 years old. In the spring of 1939 he fled to the Netherlands and reported to the Werkdorp in early March. He went to work there as a farmer. After the eviction of the Werkdorp on 20 March 1941 he found shelter with the Still family in Nieuwe Kerkstraat in Amsterdam.

He belonged to the June group among the Werkdorp people. That is, he is one of the 61 werkdorpers who were rounded up during the 2nd razzia in Amsterdam on 11 June 1941 and deported to camp Schoorl, some of them under the impression that they were going back to the Werkdorp. In Schoorl, selection takes place on health and age (18-35) and whether they have four Jewish grandparents.

Gustav is among the 57 werkdorpers who, in a group of 300 Amsterdam Jews, are sent on to camp Mauthausen. There they were all put to death. They had to perform forced labor in stone quarries and/or be subjected to medical experiments. Gustav was murdered on July 19, 1941. 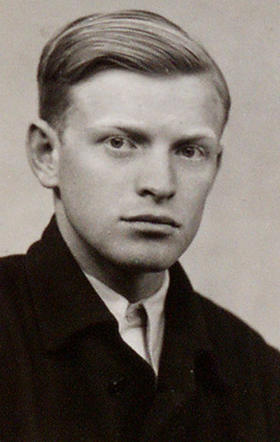