Horst Heilbron was born on 1 September 1921 in Berlin. Father Hugo was imprisoned in Buchenwald for a year, from 15 June 1938 to 27 June 1939. Horst, his brother Gunther (1923) and his sister Judith all went on a children’s transport to the Netherlands on 5 January 1939.
His brother Günther (Gerson Ben Tzvi) survived. He went via Eindhoven, Gouda to his uncle Thal at Kromme Mijdrechtstraat 53-I in Amsterdam. He arrived in Westerbork and stayed there until the liberation. His sister Judith, aged 29-04-1927, came via Losser to the Lacee family in Rotterdam. On 30-10-1944 she was killed in Central Europe. His parents plan to go to Panama, they have travel visas but lack the means. Horst’s parents were transported from Berlin on 28 March 1942 to the Piaski ghetto in Poland, located between Berlin and Warsaw, where they were murdered.

Horst was assigned to the Werkdorp in early 1940 and started working as a farmer. After the Werkdorp was evacuated on 20 March 1941, he was taken in by a foster family on Tintorettoraat in Amsterdam.
Horst belonged to the June group, the Werkdorp people who were rounded up during the 2nd major razzia in Amsterdam on 11 June 1941 and deported to Mauthausen via Schoorl camp. There they had to perform forced labour in stone quarries and/or undergo medical experiments. Horst was murdered on 16 September 1941. 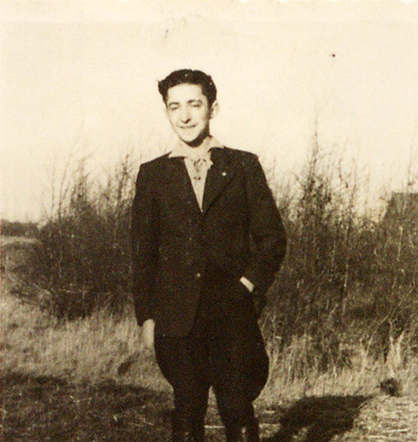