Judith Ursela Lea Leyser was born in Naarden on 23 January 1942. She was the daughter of Gitta Leyser-Rechnitz and Lothar Leyser. Her parents had met each other about three years earlier in the Werkdorp. They both fled Germany. Her parents got married in September 1940 and one month later her sister Gabi was born at 34 Dintelstraat, where Lothar’s mother lived with her elderly parents. Lothar still lives in the Werkdorp at that time. He was one of the 60 Werkdorp people who were allowed to stay after the eviction of the Werkdorp on 20 March 1941. But he also went to Amsterdam after the final closure of the Werkdorp in August 1941.

In September 1941 the Leyser family moved to Huizen, where they found shelter in a garden house “De Kwartel” behind the house of the de Wette family. They stayed there for more than a year. Her father Lothar supported the family by taking care of private gardens in Huizen. On 23 January 1942 Judith Ursela Lea was born in Naarden, probably in the Diakoness hospital.

In November 1942 all Jews in the Gooi region had to move to Amsterdam. The young family left for Amsterdam again and moved in with her father’s mother at Dintelstraat 34-hs.

On Sunday 20 June 1943 Lothar and Gitta and their children were rounded up in one of the large successive razzias and put on a train via Muiderpoort station to Westerbork. He had a ‘sperr’ and so did she as his wife, but nevertheless, a few weeks later, on 6 July 1943, they were put on a transport to Sobibor, where, on 9 July, all four were murdered immediately upon arrival. 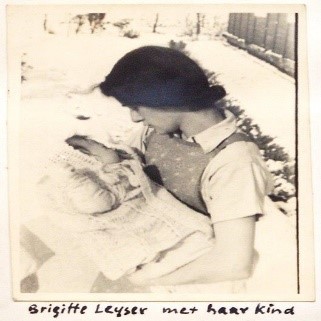