Her father is a merchant in rags, fruit and rope. Her mother is a housewife and in November 1924 she is admitted to a psychiatric institution in Apeldoorn.

After primary school Mietje went to the mulo to get her nursing diploma. At the age of 20 she leaves for Amsterdam. Her sister Betje preceded her, she worked in the Dutch Israelite hospital on Nieuwe Keizersgracht 104-114, Mietje went to work in the Old Men’s and Women’s Rest Home on Nieuwe Kerkstraat 131-139. From August 1940 onwards she works as a nurse in the rest home Zonlicht in Amsterdam. Her brother Isaac also came to Amsterdam in June 1940 and moved in with his sister. In March 1942 he started working at the internal service for the Jewish Council and was a courier between camp Westerbork and Amsterdam

Marriage between Mietje and Alfred Kanin

Mietje married Alfred Kanin on 6 June 1941 and they went to live on Reggestraat. On 20 May 1943 Mietje and her husband Alfred were arrested and deported to camp Westerbork. On 7 September 1943 they were transported to Auschwitz. Mietje was murdered on 30 November 1943, Alfred four months later, on 31 March 1944.

Her youngest sister Sientje had been transported a year before and was killed in Auschwitz in September 1942. Betje was transported to Sobibor on 13 July 1943 and was killed immediately upon arrival.
Father van der Ster first ended up in camp Amersfoort and was then deported to camp Mauthausen, where he was killed in the autumn of 1942. Mother van der Ster, together with the other residents of the psychiatric institution ‘Het Apeldoornse Bosch’, was put on transport at the end of January 1943 and was murdered immediately upon arrival in Auschwitz.
Isaac is the only survivor of the van der Ster family, founded a family with three children, returned to the Netherlands immediately after the war and died in Amsterdam in 1986. 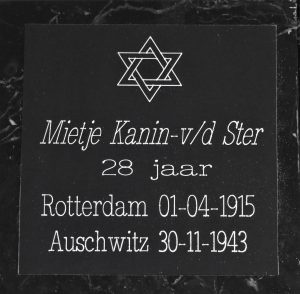