Paula Platz was born on 14 October 1889 in Gronau. Her parents died when she was almost forty years old. Paula is a teacher. She marries Salli Jonas in Münster on 12 March 1919. Jonas died on 30 October 1939.

Just before the outbreak of the Second World War she flees to the Netherlands and is appointed teacher in Huize Kraaybeek in Driebergen. The children’s home accommodated 85 children. Almost immediately after the outbreak of World War II, the Germans requisitioned the villa and the pupils had to move to Amsterdam at lightning speed. Some of them ended up on the floors above the former matzes bakery of De Haan on Valkenburgerstraat in Amsterdam.

Paula moves in with these 27 children. After a few months they have to leave this building too. Nine of the 27 children move with Paula to the Werkdorp. A large number of Werkdorp employees had left for Palestine on the ship Dora. It is the end of 1940. Three months later the Werkdorp was evacuated and Paula found a home on Merwedeplein in Amsterdam. At the same address lived Karola Frohmann-Elter, whom Paula had known since Wieringen. At the beginning of 1942 she moved to the youth hostel for the Jewish Council and started to work as a teacher. Because of this job she had a ‘sperr’, which meant that for the time being she had to postpone going on transport. But not a reprieve. On 27 May 1943 she was arrested and taken to Westerbork. At the beginning of June 1943 Paula was transported to Sobibor and was killed immediately upon arrival, on 11 June 1943. 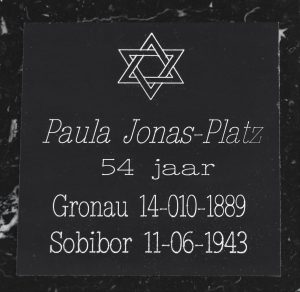