Peter Goldmann was born on 27 January 1923 in Beuthen, Poland. This place is located 15 kilometres north of Katowice.

His parents divorced when Peter was 9 years old. Peter continues to live with his mother. His father, a tailor, left Poland and lived in Amsterdam from February 1935 onwards. Peter’s father is arrested on 8 August 1942 and taken to Westerbork. He is scheduled for the next transport to Auschwitz. During the investigation into his Jewish background he was allowed to stay and was released on 8 December 1942 and returned to Amsterdam. On 21 April 1943 he is again transported from the Schouwburg in Amsterdam to Westerbork and on 27 April 1943 is put on transport to Theresienstadt. And on 29 September 1944 to Auschwitz where he was murdered.

His mother survived and emigrated to the USA.

Peter came to the Netherlands with a children’s transport in the beginning of 1939. On 28 July 1939 `The Children’s Committee’ considered him unsuitable for the Aliyah training and requested the Ministry of the Interior, Refugee Office department, to transfer him elsewhere. The answer in the letter of 1 August 1939 is that he can be transferred to the refugee centre “Loyd Hotel” in Amsterdam on 4 August 1939. In November 1939 he was admitted to the Werkdorp; the departure of 76 Werkdorpers who had travelled to Palestine with the Dora made room for refugees from the children’s transports.

After the Werkdorp was evacuated on 20 March 1941, he went to live with his father. On 11 June 1941, during the 2nd razzia in Amsterdam, he was arrested and sent to camp Schoorl. He belonged to the June group, i.e. he was among the 57 Werkdorp people selected on the basis of age, health and having four Jewish grandparents for transport to Mauthausen. Of the 300 Jews who left on 26 June, including the 57 workforces, most were murdered within three months. Peter Goldmann was murdered on 23 October 1941. 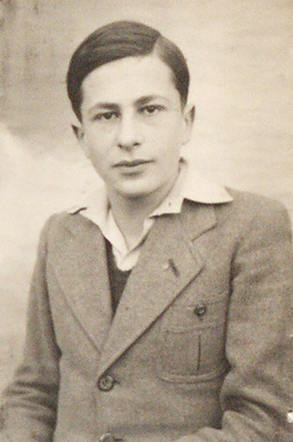