After five years of higher vocational training at the trade academy, he started working in his mother’s grocery shop. His mother was arrested on 5 June 1942 and put on a transport to Izbica in Poland, where she was killed.

Immediately after Kristallnacht, Ernst was arrested and deported to camp Dachau. He was imprisoned there until 8 December 1938 and went to Augsburg after his release. In early January 1939 he obtained an exit card. He fled to the Netherlands and reported at the beginning of March 1939 in the Werkdorp. He worked in horticulture and cattle breeding. Ernst was one of the 60 people who were allowed to stay after the Werkdorp was evacuated in March 1941 in order to bring in the harvest and deal with current affairs. After the definite closure of the Werkdorp, he left for Gouda on 1 August 1941. The first shelter was at the Joodsche Tuinbouw, Veeteelt en Zuivelbereiding at Ridder van Catsweg 61, then he went to work at the Catharinahoeve, a hakhshara training centre for 15 to 17 year-olds, and lived in Komijnsteeg. In 1942 he started working at the Central Israelite Old Men’s and Women’s Home. He lived with the van Monnikendam family. On 5 October 1942 he was arrested and transported to camp Westerbork. On 14 September 1943 he was transported to Auschwitz, where he was killed on 28 April 1944. 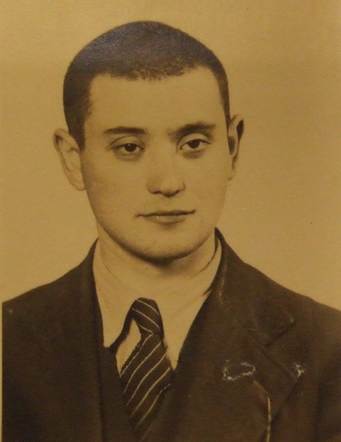