Lazlo Gottlieb was born on 13 December 1919 in Budapest. He grew up in Vienna. Lazlo’s father died in 1939. His mother and younger sister Iren (1924) stayed in Vienna. They were arrested on 1 October 1942 and put on transport to Theresienstadt. On 16 May 1944 they were deported to Auschwitz and two months later to camp Stutthof, where they were both killed. Lazlo was the house painter in the Werkdorp. After the eviction of the Werkdorp on 20 March 1941, he found shelter on Jekerstraat in Amsterdam, where he found a place together with 11 other Werkdorp people. On 11 June 1941, during the second razzia in Amsterdam, he was arrested and deported to camp Schoorl.

The stated reason for this razzia was that on 14 May 1941 a bomb attack had been committed on a villa on the Bernard Zweerskade in Amsterdam-Zuid. The villa had been requisitioned by the Germans and was inhabited by German officers. There were no casualties, there was only material damage, so no immediate measures were taken. A few weeks later, the telephone exchange of the Luftwaffe at Schiphol was blown up. A member of the Wehrmacht was seriously injured. This combination of attacks is the stated reason for rounding up more than 300 Jews aged between 18 and 35 living in Amsterdam and sending them to Mauthausen. In Amsterdam, 61 work-doctors were arrested and taken to Schoorl.
Lazlo was one of the 57 Werkdorpers who were eventually selected in Schoorl on the basis of age, health and the fact that he had four Jewish grandparents. He was put on transport to camp Mauthausen, where he was killed on 28 October 1941. 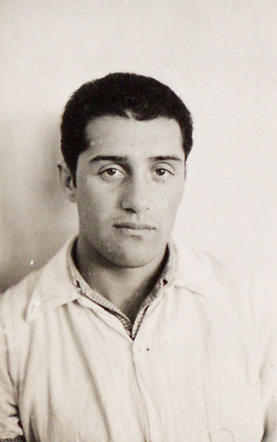