Rene Magnus was born on 8 July 1926 in Hamburg. His father leaves for the Netherlands in the autumn of 1932 to find work and a home in Amsterdam. Rene, his sister Carla (1925) and his mother came to Amsterdam at the end of December 1932 where his father had bought a house in the Jan van Eijckstraat. Rene is 6 years old then. After moving to Herculesstraat in 1935, they come to live in Watteaustraat in 1938.

His parents were arrested on 10 December 1942 and deported to camp Westerbork. They stayed there for more than four months before being transported to Sobibor, where they were killed immediately upon arrival. Sixteen-year-old Rene and his sister Carla, who was a year older, were taken in by the Jewish Council Youth Home. From October 1941 Carla was a child caretaker in the children’s homes of the Jewish Council at 58 Nieuwe Keizersgracht. Because of this function she had a ‘sperr’. On 18 July 1943 she moved to Jacob Obrechtstraat 92-hs. Carla 1925 survives, emigrates to the U.S.A. after the war and dies in San Francisco on 14 April 1979. Rene did not receive a ‘sperr’ because of his sister’s position. In May 1943 he was transported to camp Westerbork, five days later he was transported to Sobibor and upon arrival there he was murdered on 28 May 1943. 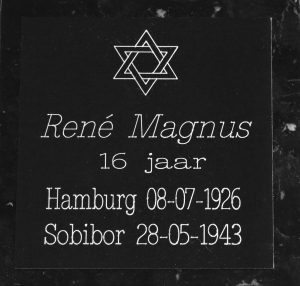