Thekla Ruth Jeidel was born on 13 September 1921 in Frankfurt am Main. She has an older brother Walther (1905). He was the son of their father Joseph Jeidel’s first marriage to Selma Seligmann. After the death of his wife Selma, father Joseph married for the second time in May 1920, this time to Recha Wieseneck and over a year later Thekla was born.

Thekla-Ruth Jeidel and Alfred Braun got married there on 20 November 1942. Her brother Walther married Alice Paula Rothschild, also in De Bilt, in July 1942.

After their marriage Thekla and Alfred Braun settled in Laag Keppel and together with all the pioneers of kibbutz Laag Keppel they were arrested on 10 April 1943 and transported to Vught.

Alfred had a ‘sperr’ because of his position. This did not help Alfred, nor did their marital status exempt them from transportation to the extermination camps. From Vught they were put on transport to Westerbork in July 1943. About two months later they were transported to Auschwitz. Alfred did forced labour for almost two months and was then murdered. Thekla was killed almost immediately upon arrival, on 3 September 1943. 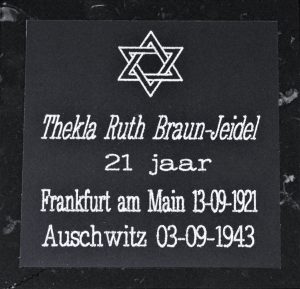