Father Carl was a merchant and a partner in the wine wholesaler I. Brück and sons at Gaustrasse 14 in Bingen. The family initially lived in Mainzerstrasse in Bingen in a house they shared with the family of Alfred Brück, Carl’s brother. After father Carl died in October 1939, mother Lilli had to move to a so-called ‘Judenhaus’, a house where many Jewish families were placed together, not long after that.

Walter Brück left Bingen in April 1936 and travelled via Switzerland to the Netherlands, finding a place in the labour village. On 19 July 1939 he joined 480 mainly German Jews on the illegal voyage of the former cargo ship Dora to Palestine. Walter tried to persuade Lotte to come along but she did not want to go to Palestine (yet). She did not want to go so far away from her parents who stayed behind in Bingen.

The ship Dora sails from Amsterdam via Vlissingen and Antwerp to Haifa in Palestine and arrives there on 12 August 1939. In Israel Walter adopted the name David Barkai. He dies in 1989 in kibbutz Hazoreah.

That Lotte was considered very suitable for the job is evidenced by the assessment made in April 1940 by the Society for Professional Training of Palestine Pioneers based on information from the leadership of the work village:

Mother Lili also has the plan to flee to Palestine with a special transport. This will not happen. She was transported from Mainz as number 465 to Piaski on 20 March 1942. Piaski was the first town in Poland where the Nazis established a ghetto in March 1940. Initially open to outsiders, from June 1941 it was a closed ghetto. From February 1942, it became a gathering place for the Jews of the German Reich. It played a key role in ‘Aktion Reinhardt’ – or the extermination of the Jews in the ‘Generalgouvernement’, that is, the part of Poland occupied by the Nazis but not annexed.

Lotte was under the impression that her mother worked in a hospital and was doing reasonably well. She apparently received another message from her mother.

Lotte, The Werkdorp and Amsterdam

Lotte arrived in the Werkdorp in February 1939. She worked there as a domestic help. After the Werkdorp was evacuated on 20 March 1941, Lotte was among the 60 people who stayed on to handle the running of the village.

In June 1941 she was in Amsterdam for a short time. Bernard Natt, a cousin of Lotte’s, survived the war and describes the evening of 11 June 1941, when the second razzia took place in Amsterdam, as follows:

In the evening of Wednesday, 11 June 1941, I went with Lotti to see a performance of the opera “Per Gynt” by Grieg in the Stadsschouwburg. It was a beautiful, pleasant performance. It was also the last time I went out with Lotti. As we were walking home, we ran into some friends from the Working Village. They were very upset and told us that our fellow residents of the Werkdorp had been arrested by the Gestapo that very night.

Lotte moved to Amsterdam in July. She was taken care of by a distant relative of hers, the Spanier family. They had a kosher boarding house.

The former head of the household in the labour village, Mrs Laufer, was also staying in the same boarding house. When in November 1941 the youth centre of the Jewish Council opened in Plantage Franschelaan, Mrs Laufer and her daughter moved there to resume her work in the Work Village. Lotte stayed with the Spanier family.

In July 1942, Lotte was put on the list of the first transport to Auschwitz. Her cousin Bernhard Natt, who also lived in the Werkdorp and survived, tried to prevent her from going. He put it this way:

Among the first to receive such a call was my cousin Lotti Brück. Her mother, my aunt Lili, had been deported from her home in Bingen am Rhein in Germany to a distant place in Poland or Russia a short time before. From there she had sent some letters to Lotti. In those letters she said that she worked as a nurse and that her circumstances were not too bad. Unfortunately, Lotti believed those letters and hoped that if she heeded the call, she would have a chance to find her mother again and stay with her. That is why she did not accept the offer of Dutch people to help her go into hiding. She was taken to the East and never returned, nor did Aunt Lili. I saw her before she left. We discussed the events but she refused to change her mind.

Brother Walter tried to find out the fate of his mother Lili and Lotte in 1947 from Palestine through various channels such as the municipality of Bingen and the Red Cross. This, however, came to nothing. 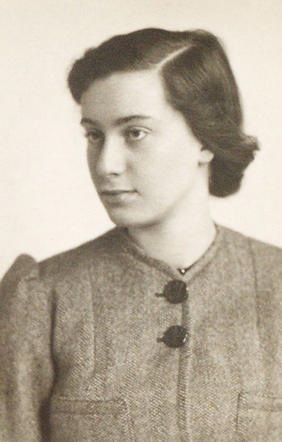