Anna Chlebowski was born on 8 December 1920 in Cologne as the eldest daughter of Sara Durakovski and David Herman Chlebowski. The Chlebowski family first lived in Cologne and moved to Essen in 1932. Anna’s father was a representative of various textile companies. In their house at Kastanienalle 38 he has a warehouse for men’s clothes and bedding fabrics. After the Nazi takeover in 1933 the Jews were immediately confronted with anti-measures. By 1934, the boycott had become so severe that the family’s economic situation became increasingly difficult.

Werkdorp and engagement with Gerhard

Anna is already in the Netherlands. Shortly after Kristallnacht she flees from Essen to Amsterdam and comes to live at Roetersstraat 8-III in Amsterdam on 23 November 1938. She lived with the J.W. Theil family. After six months she moved to Van Woustraat 195-III where she rented a room from H.J. Veldkamp’s family from 11 May 1939.

Her youngest sister Jetta Chlebowski came to live with her from Losser on 24 June 1939. She was 10 years old then and left for England on 4 July 1939, after a short stay in Amsterdam. Later she emigrated to South Africa. David, the father, was arrested on 11 July 1939 after Jetta’s departure and returned via Buchenwald, Neuengamme and Dachau to Buchenwald on 5 July 1941, where he died of tuberculosis on 3 August 1941.

Anna herself leaves Amsterdam on 14 February 1940 and goes to the Werkdorp in Wieringermeer. Her brother leaves a month later, on 15 March 1940, for Palestine. In February 1940, when she arrived in the labour village, she met Gerhard Sperber, who had arrived a year earlier. Anna worked in the household and in horticulture, and the sewing skills she had acquired at home came in handy. After the evacuation of the labour village on 20 March 1941, both Anna and Gerhard were among the 60 people who stayed. After the final closure they both looked for a place with a family in the vicinity of the Werkdorp.

Anna found this with the Leegwater family in Schermerhorn, Gerhard with the De Heer family in Middenbeemster in farmstead De Eendracht. So they live near each other, at a distance of about 10 kilometres or half an hour by bike. Almost two years after they met they decide to go through life together and get engaged on 22 December 1941 in Alkmaar.

Marriage and creche in Amsterdam

They still live and work there legally. This changes in April 1942. Then the occupying forces announce that the district must be made ‘Juden-rein’. This is the signal for Gerhard and Anna to leave. They first go to Deventer, where they arrive on 9 April 1942 at 45 Papenstraat, the gathering place for Jewish refugees in search of an individual hachshara.  Gerhard and Anna, together with a number of other work-village refugees, go to Almelo where they settle at Werfstraat 11 on 24 May 1942. They get married in Almelo on 24 July 1942. But they did not get to enjoy their honeymoon. On 10 August 1942 the mayor of Almelo issued an order to search for, arrest and bring before the authorities a number of co-occupants of the Werfstraat. They had left the municipality without the required permit. This description referred to Jews who had gone into hiding.

For Gerhard this was a reason to actually go into hiding. Gerhard continued as ‘Jan van den Berg’, the family name of Nel Leegwater-van den Berg from Schermerhorn, where Anna had found a place to live after the work village had been evacuated. He first stays for a few weeks in a boarding house in Bennekom, in the Zonnebloem home. The landlord expects guests and considers it – in view of a possible check of their guest list – too great a risk that Jan van den Berg stays with them any longer. He asks the contractor Kranen, who is working for the landlord, whether he can take Jan into his home. Jan’ came to talk to them the next day and it clicked between Jan and the Kranen family. He could stay with the Kranen family in a family with five children. Father Louis Kranen was in the resistance and was part of the resistance group around Renkum. In the beginning, “Jan” still paid for his stay and later he earned some extra money by working in the contractor’s workshop (directly connected to the house).

However, Gerhard did not stay there long either; in November 1942 he joined Anna, who had meanwhile returned to Amsterdam and had already started working at the day-care centre for the Jewish Council on 16 July 1942. Before that she had lived and worked in a boarding house on Plantage Franschelaan right next to the Jewish Council Youth Home. Based on her position in the kindergarten – the Jewish Council refers to her as a seamstress and social worker – she has a sperr, and is thus for the time being protected from deportation. Gerhard also received a sperr on the basis of his wife’s function.

The Kranen family told Gerhard that he and Anna would always be welcome, and this took shape when Gerhard visited the Kranen family after hearing from an acquaintance in Amsterdam that Father Kranen had an accident at work in which he lost his eye. Gerhard then told him that he would soon become a father and was told by the Kranen family to come to Renkum when the time came.

And in August 1943 they could go to the family in Renkum. Anna could give birth in the rest home ´t Hemeldal in Oosterbeek. The owner is Eef Zwarts, one of the pillars of the LO, the National organisation for helping people in hiding. Gerhard stayed with the Kranen family and Edith Irene was born in Oosterbeek on 27 August 1943. The plan is to register Irene as the daughter of Dina and Louis Kranen in the municipality of Renkum. It was quite plausible that Dina would have had the next child after one and a half years. But this would not happen. Within the resistance group around Renkum, betrayal had taken place and the situation within the Kranen family was no longer considered safe. Gerhard and Anna returned to Amsterdam with Irene in the beginning of September 1943.

After being placed with several host families, Anna Sperber brought her daughter Irene to a baker’s family in Drenthe, early December. Via the resistance there Irene was placed in Wierumerschouw in Groningen with Antje and Jacob Croeze. They have two children and the story the family tells the neighbourhood is that the girl comes from the West and needs a healthy environment because her mother has tuberculosis. The girl is said to be a niece of a good acquaintance from the city of Groningen and to be called Marianne van Dijk. Antje Croeze called her Irene but the name Ina was already established.

Anna and Gerhard  joined in 1944 with other Palestine Pioneers in Paris the French resistance. In July 1944 many of them were arrested, including Anna and Gerhard. After many heavy and lengthy interrogations with severe beatings in the notorious office Rue de la Pompe they were transferred to camp Drancy. In early August the Allies were already close to Paris and the German SS commander of camp Drancy decided to leave by train, taking 51 Jewish prisoners with him, including Gerhard. He and a few other Palestine Pioneers were transferred to camp Dora-Mittelbau where rockets were made in underground spaces. Gerhard was transferred to Nordhausen camp and died there, according to the official reading, on 20 April 1945, possibly as a result of a bombing raid.

Anna, whose Jewish identity the Germans were unable to establish at Drancy, was transferred as a political prisoner to the Ravensbrück women’s camp in mid-August 1944, where she was killed on 20 April 1945. Ten days later, Ravensbrück camp was liberated by the Red Army. 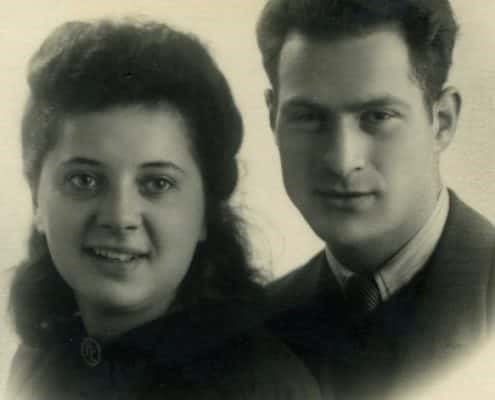 Last known addresses in The Netherlands