After father Samuel’s death the children were placed in various orphanages.

Elkan stayed successively in orphanages in The Hague and Amsterdam. In 1936, at the age of nineteen, he returned to The Hague and started working in the Israelite Orphanage as an assistant and later as a teacher of modern Hebrew. On 8 September 1941 all Jewish orphans over 15 had to leave the orphanage. Elkan was 25 then.

Elkan moved to Beverwijk and there he worked as a farm labourer near Kibbutz Beverwijk. He lived with the Mauw family on Zeestraat 54. When North Holland had to be made ‘Judenrein’, he moved to Kibbutz Laag Keppel. It was 1 April 1942. He works at the farm of the Oosterink family on Broekstraat in Hummelo. Lea Frank arrived at Laag Keppel a month earlier on the 9th of March 1942. They found each other in their background, from childhood in an orphanage. Elkan Bobbe and Lea Frank got married on 8 April 1943, two days before they were arrested together with all the members of the Kibbutz present and they were transferred to camp Vugt. They are deported to Westerbork on 3 July 1943, three days later they are put on transport. Lea Bobbe-Frank and Elkan Bobbe were killed in Sobibor immediately upon arrival on 9 July 1943. 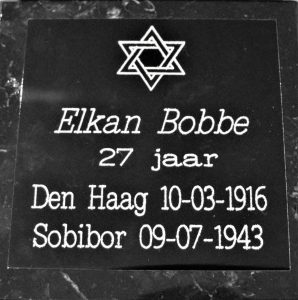