Horst Steinhardt was born on 27 July 1924 in Berlin. In May 1938 he left school. Six months later, at the age of 14, he was sent to the Netherlands to escape the dark future in the German Reich. After initial reception in Rheden and Eindhoven, he arrived at the Werkdorp in early February 1940. In the Werkdorp he was educated and worked as a blacksmith. He was not a Zionist.

His parents were divorced. His father Albert was considered as a &175er, a professional criminal, and on that basis sentenced to a prison term of one year and nine months and to two years and six months of disciplinary action, the payment of 1,000 ‘Reichsmarks’ and three years of loss of honour. Under the Nazi regime, a &175er was a person who had committed homosexual acts and from 1 September 1935 onwards this was punishable by imprisonment of between one and five years. For the more serious cases, a prison sentence of between one and ten years could be added. The law remained in force in West Germany for two decades after the war and was only abolished in 1994.

Horst’s father was imprisoned in Brandenburg/Havel from the end of September 1939 until the end of July 1941. Then he was transferred via the Berlin police station to Buchenwald camp on 4 September 1941. Four days later he was murdered. His mother and his older brother Hans Günther (1920) were transported from Berlin to Auschwitz, where they were both killed on 19 February 1943.

After the eviction in the Werkdorp on 20 March 1941, Horst was taken in by an uncle. He was put on the list for the first transport to Auschwitz and went to Westerbork on 14 July 1942 and the next day to Auschwitz. Within three months of his arrival, on 30 September 1942, he was murdered. 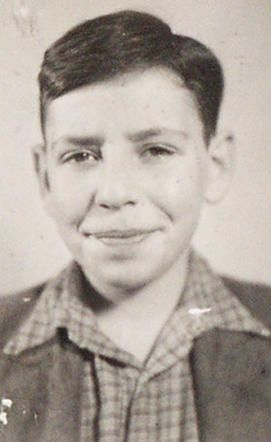