Leo Häusler was born on 13 October 1923 in Duisburg. Leo grew up in a family with three children. He had an elder sister Klara (1911) and a younger brother Norbert (1926).
Immediately after Kristallnacht (November 9, 1938) the Häusler family decided that a flight to the Netherlands might be Leo’s way out of the approaching disaster. He left in December 1938.
And disaster struck Leo’s father in September 1939. He was imprisoned in ‘Schutzhaft’ twice. In Nazi Germany, the arrest and imprisonment of persons who were disagreeable to the government, such as communists, homosexuals, Jews, Roma and Sinti, was called ‘Schutzhaft’, without a court order. Imprisonment did not take place in regular prisons but in concentration camps run by the SS or the SA, and later by the Gestapo. Schutzhaft’ could not be contested in court and there was no court protection against maltreatment during ‘Schutzhaft’. This measure came into force on 2 May 1934.

Leo’s father received his first preventive custody from 9 September 1939 to 20 October 1939 and his second from 13 December 1939 to 18 March 1940. After that he went to camp Sachenhausen. There he stayed until 2 September 1940, after which he was transferred to camp Dachau. There he was murdered on 13-05-1941. The cause of death was stated to be blood poisoning.
His younger brother Norbert was transported from Düsseldorf together with his mother and was killed in Riga on 11-12-1941.

At first Leo found a place in the kibbutz in Gouda, because of his age. As soon as he turned 16 and there was room for him in the Werkdorp, he could go there. After the Werkdorp had been evacuated on 20 March 1941, he was taken in by the van Dien family on De Lairessestraat in Amsterdam.
He did not join the other Werkdorp people who moved to the Youth Hostel of the Jewish Council in November 1941, as soon as it had opened. He remained under the radar until early 1944 and was arrested on 12 January 1944 and taken to Westerbork. Two weeks later he was transported to Auschwitz and after four months in the labour camp was murdered. His sister Klara flees with her husband Rudolf Dublon to the U.S.A. and dies in 1994 in New York at the age of 83. 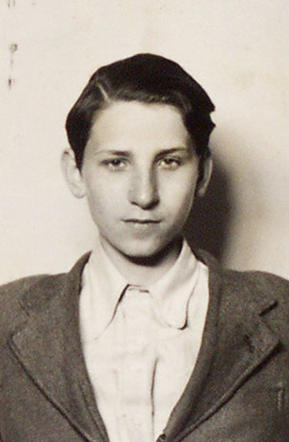