Lothar Lazarus Leyser was born on 30 November 1920 in Essen. After the unexpected death of his father in 1930, Lothar helped his mother in their sweet shop at Gänsemarkt 10 in Essen. At the same time he attended the Oberrealschule Humboldt. Hitler’s rise to power in 1933 and the Nuremberg Race Laws prompted Lothar’s mother to seek a safe haven for her children. His younger sister Ruth (1922) was sent by her mother to Palestine in 1936 on youth aliyah.

In the Werkdorp Wieringermeer Lothar meets his later wife Alice Brigitta (Gitta) Rechnitz. Like Lothar’s mother, she was born in Poland, in Slupsk, on 2 November 1920. They fell in love. After the invasion of the Germans they marry. Gitta is then heavily pregnant. Abel Herzberg, then director of the Werkdorp, was one of their witnesses on 23 September 1940. The other witness is Helene Hirsch, wife of the former director Moshe Katznelson. Daughter Gabriëlle Rebekka (Gabi) was born on 27 October 1940 in Amsterdam, where Gertrud, Lothar’s mother, had already taken refuge with her elderly parents.

After the eviction of the Werkdorp

Lothar was among those who stayed when the Werkdorp was evacuated on 20 March 1941. After the final closure of the Werkdorp in August 1941, Lothar and Gitta ended up in Huizen with their little daughter. They lived there in the garden house of a house at Patrijslaan 1. Lothar worked in private gardens in the Huizen area. Gitta is expecting their second child. Daughter (Judith Ursela Lea) Ürsel was born on 23 January 1942 in Naarden, probably in the hospital there. In November 1942, all Jews in the Gooi region had to move to Amsterdam. The young family moved in with mother Gertrud, at Dintelstraat 34-hs.

On Sunday 20 June 1943 Lothar and Gitta and their children were arrested in one of the large successive razzias and put on the train to Westerbork via Muiderpoort station. They were given a ‘sperr’, but nevertheless, a few weeks later, on 6 July 1943, they were put on a transport to Sobibor, where all four were murdered immediately upon arrival, on 9 July. Lothar’s mother worked at the Expositur and these employees were not yet arrested during the razzia on 20 June. One month later they were, and Lothar’s mother was transported from Westerbork to Auschwitz on 16 November and killed immediately upon arrival. 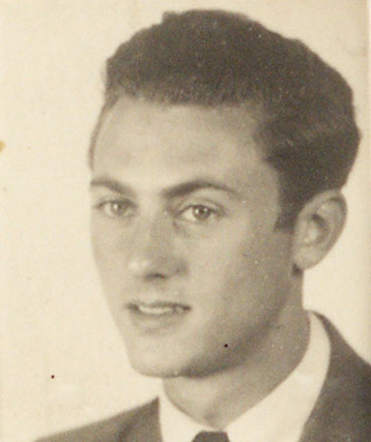