Margarethe Friedländer was born on 27 December 1919 in Breslau. She had two older brothers, Norbert and Hans. Norbert was arrested for racial disgrace in early 1938 and imprisoned in camp Dachau. In September 1938 he was transferred to Buchenwald where he was released on 29 May 1939. He fled to Yugoslavia, where he was killed by a firing squad in 1942. The fate of brother Hans is unknown.

Margarethe fled Nazi Germany immediately after Kristallnacht. She goes straight to the Werkdorp in Wieringermeer. There she meets Erwin Haar, who arrived in the summer of 1938. They fall in love and have to leave the Werkdorp at the end of 1939 for educational reasons.  They are married in Wieringermeer. They leave for Amsterdam.
Margarethe and Erwin Haar are arrested there on 23 September 1940 and detained at the police station until mid-November, when they are transferred to camp Westerbork. At that time the camp was still called the Central Refugee Camp. On 1 October 1941, there were more than 1100 Jews in the refugee camp.

Margarethe and Erwin Haar were among the 100 ‘Alte Lagerinsassen’ selected for the first transport to Auschwitz on 15 July 1942. Both were murdered within three months of arrival. Erwin was murdered on 3 September 1942, Margarethe on 30 September 1942. 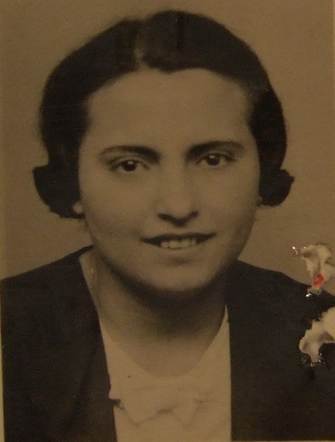