Norbert Willi was born on 26 December 1923 in Dortmund. Early 1939 he and his younger sister Lore (1927) were transported to the Netherlands. Lore ended up in Bergen aan Zee, Norbert Willi in Eindhoven. They had two cousins Herman and Alfred in Amsterdam. Alfred made efforts to bring the children together again because of Lore’s homesickness. Alfred devoted himself to getting Norbert to live with a family in Amsterdam. Norbert, however, indicated that he wished to stay in Eindhoven, where he could train as an electro-technician. Lore ended up with the Frank family in Eindhoven in September 1939, after a stay in Driebergen and Rotterdam. Norbert and Lore then stayed together for two and a half months. Norbert then left for the Werkdorp. Lore leaves for England on 14 May 1940 on the ship ss Bodegraven and survives the war.

Their mother, left alone in Dortmund, did have plans to emigrate to Australia, but lacked the means. Norbert’s father died in Dortmund in 1936, his mother was deported from Dortmund to Theresienstadt on 29 July 1942 and from there went to Auschwitz, where she was killed on 9 October 1944.

In the Werkdorp Norbert worked in agriculture. And after the Werkdorp was evacuated he lived in Amsterdam. He was appointed assistant gardener in the gardens of the Jewish Central Vocational Training Centre (J.C.B.) at 93 Amstel in Amsterdam in June 1942. This position gave him a ‘sperr. It brings postponement but not reprieve. And he, too, was put on transport from Westerbork in March 1944. From Auschwitz, Norbert participated in a death march to Flossenburg. He was liberated by an American division on 23 April 1945. He died there on 2 May 1945 as a result of all the hardships he had to endure. 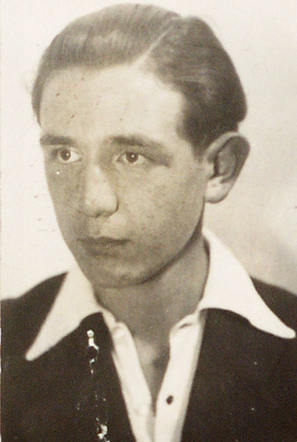