Ruth Schwarzschild was born on 6 September 1919 in Bad König, a town 65 km south of Frankfurt am Main. Her brother Werner (1911), Cecile (Zoe) (1914) in England and her brother Zeev in Israel survive the war. Ruth attended the hachshara education in Ellguth-Steinau. In October 1939 she flees to the Netherlands and arrives in the Werkdorp on 9 April 1940. There she started working as a domestic servant. After the Werkdorp was evacuated on 20 March 1941, she found shelter with the Löwenthal family.

From 11 March 1942 she started working as a seamstress in the HAV department at 74 Oude Schans in Amsterdam. To support the cornered Jewish population, the Jewish Council set up the HAV department for people who had to be deported. Four hundred Jews worked in this office. They drew up luggage lists for those who were to be transported, collected sturdy shoes and rucksacks for example, helped pack and took care of the necessary formalities.

It is because of this job that Ruth has a “Sperr” . It provides her with some respite. Nevertheless, she was arrested on 20 June 1943 and taken to Westerbork. Five months later, on 16 November 1943, she was transported to Auschwitz, where she was murdered immediately upon arrival on 19 November 1943. 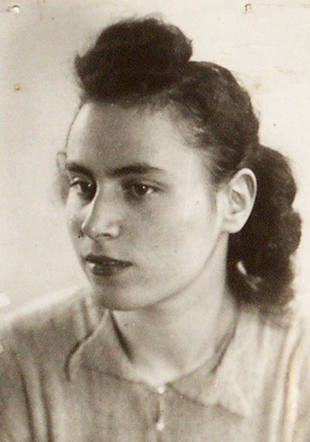