Rudolf Elk was born on 25 May 1901 in Frankfurt am Main. Before his flight to the Netherlands in the summer of 1936, Rudolf Elk worked as a dentist in Bad Vilbel (Frankfurt am Main district). He also obtained a doctorate in economics. At that time 69 Jews lived in the village and from 1936 Rudolf was no longer allowed to continue his practice for his non-Jewish clients.

He reported to the Work Village on 19 September 1936 and from February 1937 he headed the secretariat of the Foundation for Jewish Work. He moved to Amsterdam at the end of July 1937. When new pupils for the Work Village arrive in Amsterdam they must first report to the Committee for Jewish Refugees and the Foundation at ‘s-Gravenhekje 7 in Amsterdam. Rudolf goes to the Werkdorp every Sunday, teaches there and discusses the state of affairs with the leadership about the arrival of new pupils.

Fate of Rudolf and Family Elk

By the end of March 1939 his mother Hanna, by then 83 years old, fled to the Netherlands. His elder sister Rosa preceded her in early March 1939 and found accommodation for the two of them in Lekstraat in Amsterdam. After living at various addresses mother and daughter Elk came to live at Maasstraat in April 1941, where Rudolf joined them a year and a half later. The three of them moved to Afrikanerplein in February 1943. Rudolf was arrested early June 1943 and deported to camp Westerbork. His mother followed more than a month later. Both Rudolf and his mother had a ‘Sperre’. This proved to be no protection for them but a scrap of paper. Rudolf was transported to Sobibor together with his mother – she was almost 87 at the time – on 20 July 1943, where they were killed immediately upon arrival.

Rosa (1891), Rudolf’s sister, died on 14 August 1943 in Amsterdam as a result of liver disease. His brother Salo (1885) lived in Munich in the early forties, was arrested and deported to Gurs. He was then deported from Drancy camp in France to Auschwitz on 28 August 1942. He was declared dead after the war. Julius Joseph, Rudolf’s father died in Bad Vilbel in 1906. 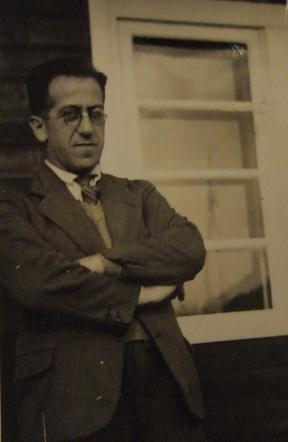