Sydonia Mehler was born on 9 December 1905 in Stanislawow in Poland. The village is situated 50 kilometres east of Warsaw. Sydonia is already married and divorced when she flees to the Netherlands. At the end of November 1938 she reports to the Werkdorp and starts working as a domestic help. A few months later she is joined by her younger brother Max (1910).

After the eviction of the Werkdorp on 20 March 1941 Sydonia is appointed office assistant at the Jewish Council at 74 Oude Schans from 15 May 1941. She is appointed to the department HAV ( Help to Departures when the transports are announced). To support the cornered Jewish population, the Jewish Council set up the HAV department for people who had to be transported. At a certain moment, 400 Jews worked in this office. They drew up luggage lists for those who were to be transported, collected sturdy shoes and rucksacks, helped pack and took care of the necessary formalities.

A month after her appointment at the Jewish Council, her brother Max was transported to Mauthausen in the 2nd razzia in Amsterdam on 11 June via the internment camp Schoorl. Within three months of his arrival he was murdered on 19 September 1941. Sydonia has a ‘sperr’ because of this function. With a ‘sperr’ one was usually temporarily protected from transport. In the spring of 1943, she too was rounded up and taken to camp Westerbork. About six months later her ‘sperr’ proved to be worthless and she was transported to Sobibor, where she was killed immediately upon arrival on 16 July 1943. 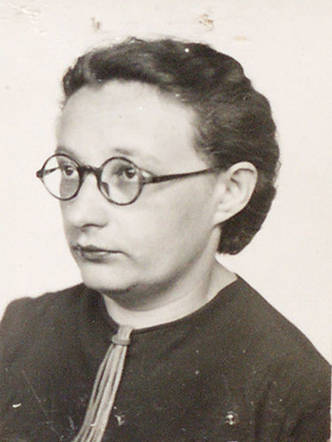