Willy was born on 14 October 1919 in Vlaardingen on Pompenburgsingel as the second child of Hartog and Lea Hiegentlich. Willy had an older brother Alfred (1913). Although Willy’s parental home was close to the station, their house in Harddraverstraat was not hit during the bombardment of Rotterdam on 14 May 1940. Her parents and Alfred moved to Bosschestraat 133 in Scheveningen. They were arrested there on 21 November 1942 and transported to camp Westerbork. The parents were transported to Sobibor on 1 June 1943 and were killed immediately upon arrival. Alfred was transported on 13 July 1943, and another message from Sobibor arrived on 8 November. He was killed on 30 November 1943.

Willy: from Beverwijk to Laag-Keppel

Willy had already left for Amsterdam in the autumn of 1940 and almost six months later she joined the group of residents in the kibbutz in Beverwijk. She had to leave there more than a year later when the Germans wanted to make the coastal strip in North Holland ‘Judenfrei’. And she leaves for the kibbutz in Laag Keppel where her future husband has also arrived after leaving the Werkdorp and after a short stay in the kibbutz in Franeker. Robert Feblowicz and Willy Hiegentlich got married there on 12 November 1942. In early April 1943 they and the other pioneers were arrested in kibbutz Laag Keppel and deported to camp Vught. Early July 1943 the group of pioneers from Laag Keppel was transported to camp Westerbork. After about two months Willy was transported to Auschwitz, just like her husband. Robert first had to do forced labour for a number of months and was killed in March 1944.  Willy was killed on 3 September 1943, almost immediately upon arrival. 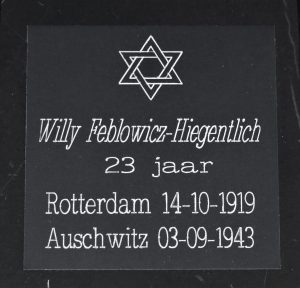