Efraim Kanarak was born on August 30, 1922 and grew up in Leipzig. His father was a furrier and moved to Leizig from Poland where he married Gittel Zucker in 1920. Efraim is the oldest of five children. He has three younger sisters, Fanni (1923) Ruth (1925) and Chaja (1933) and a younger brother Eliser Benjamin (1929). With a three-year interlude in Berlin, they lived in Leipzig until their emigration.

With the rise to power of the Nazis in the spring of 1933, the situation for the Kanarek family changes overnight.

Until then, the Kanareks had been a prosperous family with a nanny and a domestic helper. The Nazis seal the fur business and confiscate the fur stocks. The Kanarek family decides to flee.

The Kanarek family emigrates to the Netherlands on March 7, 1934 and settles in Weesp. Father Kanarak had already gone ahead in November 1933 to look for work and a place to live in order to settle down and made use of the business contacts he already had in our country. He has placed his family with relatives in Germany for the time being.

Also in the Netherlands father Kanarek sets up a fur business. This went so well that in 1937 he opened a studio in Amsterdam on the Raamgracht. But with the outbreak of World War II the situation for them in the Netherlands also became critical. In February 1941 all Jews in Weesp were registered. And in the spring of 1942 all Jewish families in Weesp were notified to move to Amsterdam. On 29 April 1942 the family moved into a house near the business premises on the Raamgracht. With the exception of Efraim.

Ephraim and his family

Since their departure from Leipzig in 1934 Efraim had finished secondary school in Amsterdam – he was living with the Krieks family there – and had begun studying chemistry. There the plan arose to leave for Palestine and in preparation for this he reported as a Palestine pioneer in the labour village. There he trained as a blacksmith. After the evacuation of the Werkdorp he returned to Weesp.

Efraim began his flight to Switzerland on his bicycle after his parents left for Amsterdam. He is arrested near the Swiss border and taken to Camp Drancy. From there he is forwarded to Auschwitz on September 23, 1943. On January 23, 1945, he was transferred to Camp Buchenwald. He must have been murdered there between arrival and the liberation of Camp Buchenwald on April 11, 1945.

His parents, together with their two youngest children Benjamin and Chaja, were arrested in Amsterdam on March 23, 1943 and deported to camp Vught. They were held there until 23 May 1943 before being transferred to camp Westerbork. They were transported the very next day and all four were murdered immediately upon arrival. Efraim’s oldest sister married Gerrit Tak on 15 July 1942. They are arrested on 10 February 1943 and also go first to camp Vught. They are transferred to camp Westerbork ten days later. There their daughter Henriette was born on 25 July 1943. They were transported to Auschwitz on September 7, 1943. Fanni and her daughter were murdered upon arrival, her husband Gerrit Tak performed forced labor until 31 March 1944 and was then murdered.

Ruth, Efraim’s second sister, went into hiding. She left Weesp earlier than her parents and lived on Michelangelo Street in Amsterdam. In the spring of 1943 she went into hiding in Eindhoven. After that she moved to Heythuysen and Roermond. In the fall of 1944 she ends up in Assen and in the village of Vries a little further down she experiences the liberation in April 1945. She starts training as a student nurse at the Jewish Invalids in the fall of 1945. There she learned that her entire family had been killed. She decided to leave for Palestine and arrived there in the summer of 1946. She married, had three children, and at the end of her working life was head of a medical library. Ruth Kanarek died in Israel in 2011 at the age of 86. 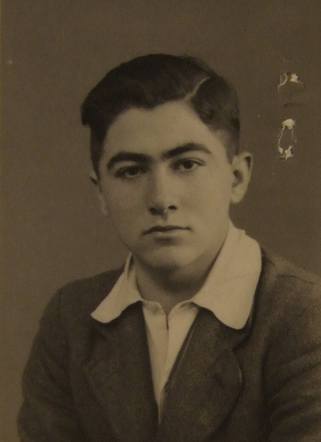