Heinrich Max Spittel was born on 27 February 1918 in Berlin. At the beginning of their marriage his parents live in Eisenach at 17 Marienthalstrasse. Around 1910 there are 420 Jews living there. They made up about 1 per cent of the town’s population. In 1933 their number had fallen to 378 and in 1939 emigration had left 215.

By then the Spittel family had been living in Berlin for a long time.

Heinrich grew up in Berlin and in 1937 went on a hachshara to the Jägerlust estate near Flensburg. He has been together with Sophie Wald since 1935. They met at a meeting of the haboniem, an international socialist-zionist youth movement. She too went to Jägerlust to prepare for a future in Palestine.

After Kristallnacht, Heinrich, like the other residents of Jägerlust, was arrested and detained in the Kiel police station. From there they were transferred to camp Sachenhausen, where they were released at the end of December 1938 if they promised to leave the German Reich. Sophie was imprisoned for one day and then released.

Kristallnacht, their arrest and imprisonment are the reasons for their emigration. In mid-February 1939 they leave for the Netherlands and report at the Deventer Association.

Heinrich in The Netherlands

Heinrich soon finds a place with the Wagenvoort family in Vierakker. Sophie goes to Steenderen. Three months later, in the summer of 1939, he reported to the Werkdorp and started working there as a gardener. There he met Siegfried Rosenthal, whom he had already met at Jägerlust. Heinrich was among the 60 people who stayed after the Werkdorp was evacuated on 20 March 1941. When the final closure occurred he left at the end of July for Arnhem, where Sophie had also found work. Between August 1941 and April 1942 he returned to North Holland and settled in Hoorn. This is also the address where another Werkdorper and also a gardener lived, Ernst Levenbach. In April 1942, Heinrich returned to Arnhem because of the ‘Jew-freeing’ of North Holland and worked as a gardener for private individuals. In the autumn Sophie and he consulted Kurt Hannemann about the possibility of going into hiding. Before they could decide, they were rounded up and transported to camp Westerbork in December 1942. They stayed there for about ten months and were transported to Auschwitz in September 1943.

Fate of Heinrich and Sophie

Hein is sent to the Buna-Monowitz camp, also known as Auschwitz III, where most of the prisoners die within a few weeks. This was due to the heavy and unhealthy work they had to do in the synthetic rubber factory of IG-Farben. Heinrich survived there for more than a year. In August 1944 the factory was bombed by the British for the first time. The forced labourers, including Heinrich, were then transferred to a camp in France, Camp Natzweiler-Struthof, just across the border in Germany. This camp was set up by the Germans because of the presence of granite and is called Nacht und Nebel. On 23 November 1944, this camp was liberated by the Americans and the prisoners were transferred just before that time via camp Dachau to camp Buchenwald. In March 1945, the prisoners were transferred to Bergen-Belsen. This camp was liberated by the Russians on 15 April 1945.   Heinrich had applied for repatriation to the Netherlands, but was not on the transport list. He died of privation and exhaustion ten days after the British troops liberated Bergen-Belsen. His wife Sophie Wald survived the war and emigrated to Palestine, married there, had two daughters and died in 2012. 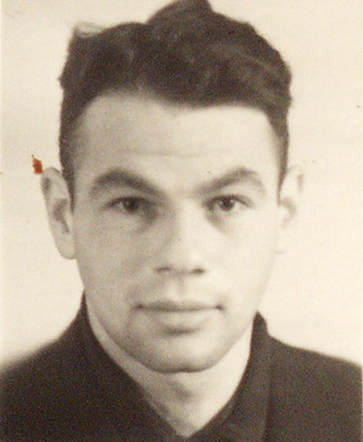